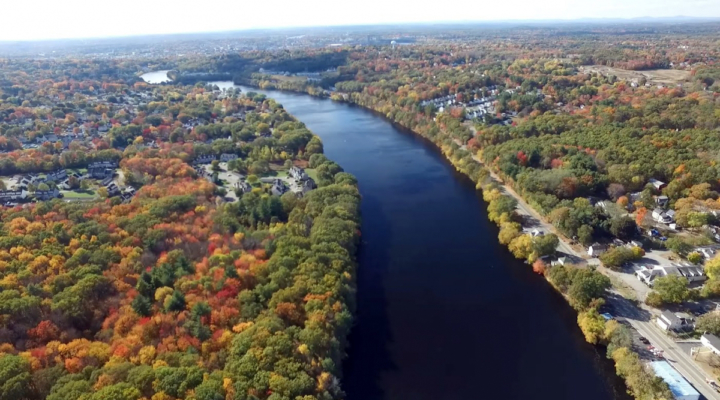 DURHAM, N.H. — University of New Hampshire researchers estimate that more than 10 percent of streams in the Merrimack River watershed, which covers areas of New Hampshire and Massachusetts, are impacted by high chloride concentrations as a result of road salt applied during winter. Salt concentrations can be highest in the summer, raising concerns about harm to freshwater plants, invertebrates, amphibians, and fish.

“People place road salt, which consists mostly of sodium chloride — table salt — on our roads, sidewalks, and driveways to improve driving and walking conditions throughout the winter. As you know, salt dissolves very easily. Much of this enters groundwater, then slowly drains into rivers, which dominates flow during summer. The salt content of streams is often highest in summer, not winter,” said Shan Zuidema, a research scientist with the Water Systems Analysis Group at the UNH Earth Systems Research Center.

“Too much salt can harm a variety of freshwater organisms, such as wetland plants, invertebrates, amphibians, and fish. Many of the plants and animals that form the base of the food web that support fish are affected. We need as much good information as we can to make informed decisions about how to trade off winter safety with preservation of our riverine habitats,” said Zuidema, lead author of the study who conducted the research with colleagues from UNH, Plymouth State University, and the U.S. Forest Service.

“During severe winters we need to use more road salt, so the possible influence of winter weather on stream water quality is obvious. However, since so much of this road salt enters soil, then groundwater, and during dry summers the only source of water in the river is from old groundwater, we expected that the dryness of the summer could explain a lot of the impairment that we observed in New Hampshire streams,” Zuidema said.

Because scientists didn’t have long-term records for streams ranging from small creeks to large rivers, they developed a computer simulation model that calculated how much road salt must have been applied to result in the chloride concentrations that they saw in streams. The model could then simulate conditions in all streams and rivers in the entire watershed.

They found that, on average, about 11 percent of streams in the Merrimack River watershed are impacted by high salt concentrations. They also found that the proportion of all streams that are impacted changes from year to year based on any given year’s weather. Unsurprisingly, they found that the amount of winter precipitation indicates how impacted smaller streams will be since greater winter precipitation can mean more road salt is applied. However, they found that summer chloride concentration is driven by the dryness of the summer, but only in larger rivers, particularly in cleaner, less developed part of the watershed just downstream of the White Mountains.

“We were quite surprised to see how different the effect of high snow years was on large versus small rivers. Our results suggest that if high snow years are associated with wetter summers, large rivers have better water quality because cleaner parts of the watershed like the White Mountains dilute the poorer water quality coming from more polluted streams. The response of the model and in the data makes sense because so much of the water leaving the Merrimack River watershed is from the mountains,” said New Hampshire Agricultural Experiment Station researcher Wilfred Wollheim, associate professor in the department of natural resources and the environment and one of the study’s authors.

“However, we didn’t anticipate that effect would overwhelm the additional loading from road salt. It would be interesting to see what kind of response would emerge from applying the model to different watersheds with different configurations of land-use,” Wollheim said.

Going forward, UNH scientists plan to expand the model to additional New England watersheds that have similar threats from road salt. The model also allows them to look at questions of change over time — how land use change and climate change may alter water quality impairment due to salt contamination.  Most importantly, on-going applications of the model will apply different road salt application rates to see how river conditions change.

“The model that we developed for this work extends our capacity to represent human-natural interactions surrounding water in the landscape, which can help us to manage stream health better,”Wollheim said. “The tools developed in this work may be useful to managers to assess potential benefits to the environment as improvements in road salt application technology and training continue to reduce the amounts of chloride needed to keep people safe in winter.”

These research results are presented in the Journal of Environmental Quality in the article “Controls of Chloride Loading and Impairment at the River Network Scale in New England”(doi:10.2134/jeq2017.11.0418).

Submit your photos for a chance to win $100