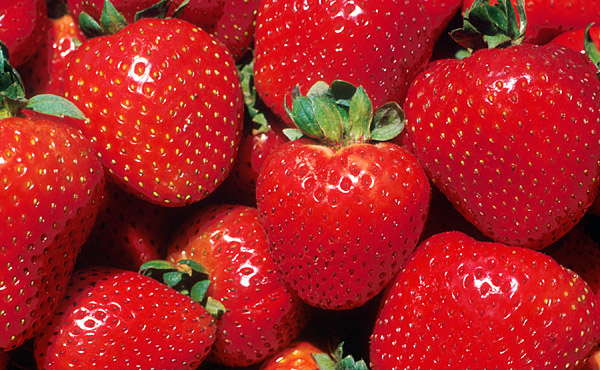 A cool, damp spring has delayed the strawberry crop in parts of northern New England, but many Fourth of July revelers should be able to indulge in strawberry shortcake. (Wikimedia Commons)

ESSEX, Vt. (AP) — A cool, damp spring has delayed the strawberry crop in parts of northern New England, but many Fourth of July revelers should be able to indulge in strawberry shortcake.

The crop, which usually opens to pickers in early to mid-June, was about two to three weeks behind schedule at Paul Mazza’s Fruits and Vegetables in Essex, Vt., but this week the vast rows were full of large, plump fruit.

“I have never seen a crop like this,” said Beth Albright, of Jericho, as she knelt in the patch picking a bounty of strawberries on Wednesday.

Schartner Farms in North Conway, N.H., and Berry Creek Farm in Westfield, Vt., both are having their latest-ever starts to the season this year. Charlotte Berry Farm, also in Vermont, lost 90 percent of its strawberries this year due to pounding rains, said Melissa Beatty, an owner.

“It’s the coolness and the wetness. The berries need sun and warmth, and they need warm nights,” said Nancy Schartner, one of the owners of Schartner Farms, which opened their picking season Tuesday. “The nights were wonderful for sleeping. But it was chilly for the berries and they hunkered down.”

The late start to the season has resulted in a dearth of local berries at many supermarkets.

Some of Hannaford Supermarkets’ 181 stores in Maine, New Hampshire, Vermont, New York and Massachusetts were still awaiting local berries as the Fourth of July arrived.

As of this week, only half of Hannaford’s 21 local strawberry vendors were making deliveries to stores, but there are still plenty of berries from elsewhere, said spokeswoman Ericka Dodge.

In Washington, Maine, organizers of the Washington Strawberry Festival feared they would be left without enough berries for the 73rd annual event, to be held on Saturday.

“It has been one of the most challenging years to get our strawberries. This year we’re scrambling,” said Mindy Gould, president of the Washington Ladies Guild, which organizes the event.

But, in the end, Gould promised that just enough berries have been collected for strawberry shortcake, strawberry pie and strawberry pizza.

Schartner in New Hampshire said the late crop is a bumper one, and the berries are “gorgeous.”

“They just took their time coming,” she said.

Making use of fresh strawberries, peas with UMaine Extension
May 27, 2020