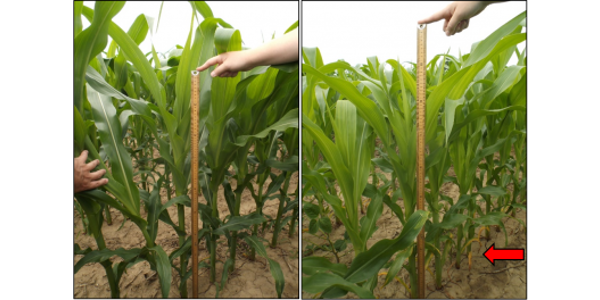 Success of sidedress applications can depend on seasonal weather patterns. When April – June rainfall was near normal to deficit, in-furrow applications reduced grain yield up to 22 bushels A-1 when full sidedress was delayed from V4 until V10. Profitability was similarly reduced up to $79 A-1. Reduced nitrogen rates required by the in-furrow placement were not able to maintain yield potential until the V10 sidedress timing when rainfall was below normal.

Similar yield trends (although not statistically different) were observed with the 2-by-2 nitrogen strategy where yield was reduced up to 11 bushels A-1 when full sidedress was delayed from V4 until V10. Unlike the in-furrow strategy, profitability in dry years was not reduced using the 2-by-2 nitrogen strategy. Although the in-furrow or 2-by-2 strategies often achieved similar yields, both increased grain yield up to 18 bushels A-1 compared to pre-plant incorporated nitrogen.

When April – June rainfall was above normal (i.e., wet year), similar yields were achieved when sidedress was delayed from V4 to V10 using the in-furrow or 2-by-2 nitrogen strategy. No yield difference suggested the risk of early applied nitrogen loss (i.e., V4) in wet years was less than the risk of reduced uptake with late applied nitrogen (i.e., V10) in dry years. In a wet year, poultry litter plus V10 sidedress provided a slowly available nitrogen source and increased yield 17-27 bushels A-1 relative to the in-furrow or 2-by-2 strategies with V4 sidedress. Grower profitability using poultry litter will depend on the cost effectiveness of the litter source.

One point emphasized by the study was the adage “start right to finish well.” Canopy measurements collected at V6 indicated corn yield potential was influenced early in the growing season. Nitrogen management strategies (i.e., pre-plant incorporated, in-furrow, 2-by-2) must sufficiently supply nitrogen until sidedress timing to influence success of the in-season application (see photos). Except for poultry litter plus V10 sidedress in a wet year, no positive yield or profitability responses were observed when full sidedress was delayed until V10.

Growers splitting their nitrogen applications will minimize risk when applying sidedress at V4 and may want to consider late vegetative nitrogen sidedress timings as a rescue application for northern corn production regions instead of a standard practice.

For additional information on this research trial and others, please visit the Michigan State University Soil Fertility Researchwebsite and view our online video updates.

Dr. Steinke’s work is funded in part by MSU’s AgBioResearch.