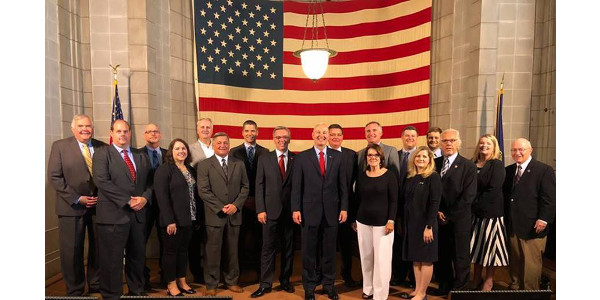 Governor Ricketts with representatives of the Nebraska Governor’s Council for International Relations at today’s news conference. (Courtesy of Office of Governor Pete Ricketts)

“Trade has been a great way to grow Nebraska for many years,” said Governor Ricketts. “With over 95 percent of the world’s population living outside the United States, we have billions of potential customers for the food we grow and the things we make here in Nebraska. Last year, I formed the Governor’s Council for International Relations, and this week, the Council has joined me at the State Capitol to unveil a new plan that will inform our work in this area for the next five years. To grow Nebraska, my team will continue to make international trade a top priority.”

The Council was launched by Governor Ricketts in 2017 to spearhead growth initiatives in areas such as foreign direct investment (FDI), export, foreign student enrollment, and international tourism. It consists of leaders from 30 state agencies and organizations, including the Governor’s Office, the Nebraska Department of Economic Development (DED), the University of Nebraska, the Nebraska Farm Bureau, and the Nebraska Cattlemen’s Association among many others.

The Strategic Plan was formulated with input from each member organization. It identifies six main areas as targets for concerted growth initiatives. They include:

4. Develop an engaged network of Nebraska goodwill ambassadors to promote the state overseas.

The “Strategic Plan for International Engagement” can be downloaded by clicking here. A full video of the news conference can be found here.

STATEMENTS OF SUPPORT FROM THE GOVERNOR’S COUNCIL FOR INTERNATIONAL RELATIONS

“I applaud the state for taking the initiative to coordinate our efforts across all sectors, including higher education which is so important to our state. Without a strategic plan, things don’t connect as well as you’d like. Having this plan in place with these goals, I look forward to the benefits to our state for a long time to come. Thank you to the partners involved for the opportunity for the University to contribute moving forward to developing talent and bringing more investment to Nebraska as well as sharing with the rest of the world the products that we produce here,” said University of Nebraska-Lincoln Chancellor Ronnie Green.

“International trade and global relations are critical to further developing markets for Nebraska’s agriculture commodities. We are excited about the collaborative efforts and opportunities to expand those markets through the strategic plan developed by the Governor’s Council on International Relations,” said Nebraska Farm Bureau President Steve Nelson.

“I want to thank Governor Ricketts for his leadership and vision on the Strategic Plan for International Engagement. In order to continue Nebraska’s success in the international marketplace, it is essential for agriculture to have a roadmap for future market development. Nebraska Cattlemen and our state’s agricultural community are excited to continue working with Governor Ricketts to strengthen our relationships abroad and promote the Nebraska brand,” said Jessica Herrmann, Nebraska Cattlemen Director of Legal & Regulatory Affairs.

“Trade is critically important to raise Nebraska’s profile around the world and create demand for our quality agricultural products. I’d like to thank Governor Ricketts and the Council for identifying regions where we can grow exports and strengthen existing relationships to create additional opportunities for Nebraska ag producers and agribusiness leaders to promote and sell their products,” said Nebraska Department of Agriculture Director Steve Wellman.

“The importance of international markets for Nebraska’s wheat farmers cannot be understated. Half of our state’s wheat is exported annually. We appreciate the Governor and other Nebraska commodities and organizations coming together to have conversations and develop a plan to help increase exports and international engagement,” said Brent Robertson, Nebraska Wheat Board chairman and a wheat farmer from Elsie.

“Tourism is the state’s third largest industry, and one of the keys to growing Nebraska. The agency has already been developing and implementing strategies to raise Nebraska’s profile internationally, and we look forward to partnering with the council on the initiatives in this plan to help more people around the world experience the Good Life,” said Nebraska Tourism Commission Director John Ricks.