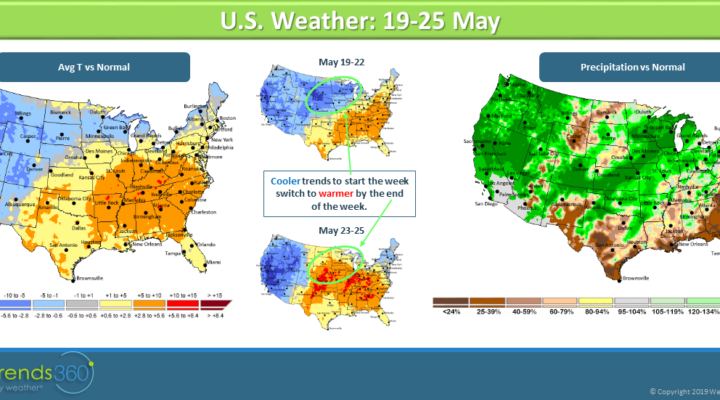 Although the end of the week will be stormy, the start to the week was actually generally drier than normal for much of the Plains and Midwest. These drier days should have allowed for advancement of corn planting, which continues to be significantly behind schedule.

WASHINGTON — An unsettled weather pattern is going to make for an interesting end of the week and into the weekend for the Central US. Today [Thursday], severe thunderstorms are possible for the central Plains and into the Midwest. Rain, strong winds, and even hail are possible with any storms that develop in this region today. On Friday, the risk for severe thunderstorms is greatest in the Plains, although marginal risk does once again extend into portions of the Midwest. Large hail and some tornadoes are the biggest threats for the Plains tomorrow, especially across Nebraska and western Texas. By Saturday, the risk for severe weather shifts slightly to the east, covering an area that stretches from Iowa to Texas. While eastern Texas currently has the greatest chance for damaging severe weather, the entire area is still at risk for strong winds, hail, and even tornadoes on Saturday. Those living in the Central US should closely monitor the weather through the weekend and heed any warnings that are issued.

Although the end of the week will be stormy, the start to the week was actually generally drier than normal for much of the Plains and Midwest. These drier days should have allowed for advancement of corn planting, which continues to be significantly behind schedule. As of earlier this week, only 30% of the nation’s corn crop had been planted, compared to 66% for a 5-year average and last year’s pace of about 59%. This also marked only a 7-point advancement from the previous week. All main corn producing states remain behind their respective 5-year planting averages. In general, more southern states like Texas, North Carolina, and Tennessee do not trail their 5-year planting averages by as much as their neighbors to the north. Illinois continues to track the farthest behind schedule, making only a one-point advancement from last week to 11% complete by the start of this week. Typically, by this time of the season, planting is just over 80% completed. South Dakota has finally begun to plant corn, advancing to 4% complete by the start of this week. Their delayed start has planting well behind the average of 54% complete. Other key states are as follows: Indiana is 51 points behind their average pace, Iowa is 28 points behind, Minnesota 44 points, North Dakota 32 points, and Nebraska 26 points.

Looking ahead to next week, wetter than normal trends are once again expected to persist for much of the corn growing region. Weekly rainfall totals will likely be highest from Wisconsin to Kansas and into western Arkansas up through northern Illinois. Wetter than normal trends will extend into the eastern Corn Belt as well, although total rainfall amounts for the week are expected to be slightly less. Temperature-wise, trends for next week as a whole will split the country. The South Central, Midwest, and East will trend warmer to much warmer than normal, while the Northern Plains and West trend colder to much colder than normal. However, for much of the Corn Belt, the week will start on a colder than normal note before much warmer than normal conditions move into the region later in the week. By the end of next week, many in this region could be trending 10-15F above normal.