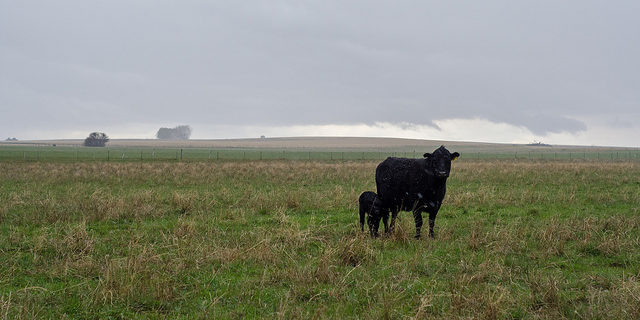 Four major storms in a month's span with record snow are causing hardships for ranchers in the Dakotas, though their livestock appear to have made it through in decent shape. (Colby Stopa via Flickr)

BISMARCK, N.D. — Four major storms in a month’s span with record snow are causing hardships for ranchers in the Dakotas, though their livestock appear to have made it through in decent shape.

Livestock deaths appear to be minimal, according to rancher groups. And the latest Agriculture Department reports estimate animal losses to be mostly “average” to “light.” That’s due largely to the lead time ahead of the storms, officials said.

“These storms are hard on the livestock, but Mother Nature has prepared them much better with their natural thicker fur and fat layers,” said Silvia Christen, executive director of the South Dakota Stockgrowers Association. “Ranchers have also had time to bring animals home to more protected areas.”

That wasn’t the case in 2013, when a strong October blizzard struck the western Dakotas and caught forecasters and ranchers by surprise. Many cattle were still in summer pastures and didn’t yet have their protective winter coats.

Jon Millar, who ranches near Sturgis in western South Dakota, lost 20 of his 450 cattle in that storm and said he felt fortunate, with many of his neighbors losing three-fourths of their herds. This year, he has lost fewer than half a dozen animals — “nothing astronomical” — despite 2 feet of snow on his ranch compared to nearly none at this time last year.

“It’s a lot tougher winter than we’ve had for a few years,” he said.

Rapid City, in western South Dakota, has 25 percent more snow than its long-term average, according to the National Weather Service. The city also saw record snowfall on Christmas Day and on Monday.

Western North Dakota also has received heavy snow. Bismarck has about 4½ feet, the most ever recorded at this point of winter.

More snow means more work for ranchers to protect and feed livestock, more stress on equipment and less time for other things like family activities.

“The weather has been a major stressor for livestock producers,” said Julie Ellingson, executive vice president of the North Dakota Stockmen’s Association. “There are no ‘snow days’ for ranchers. When conditions are the worst, the cattle need you the most.”

Jon Millar said he, his wife Breezy and their two children will “keep plugging on.”

“It’s what you do. You just keep going,” he said. “It’s still a rewarding way of life. Sometimes there are hardships, but they make you appreciate the good times that much more.”