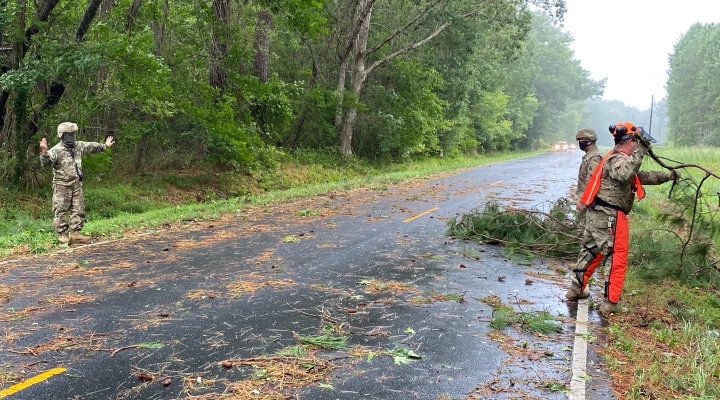 M.L. Everett Jr. is a Southampton County cotton and peanut producer who represents farmers in the southern Coastal Plain on the Virginia Farm Bureau Federation board of directors. With crops parched from persistent drought conditions before the storm, he said, farmers needed wet weather.

“If we didn’t get any rain quickly, there wouldn’t be anything there to harvest,” Everett said, explaining the drought pushed deer to scavenge the new leaves off peanut and soybean plants. Cotton wasn’t thriving either.

“Before-and-after pictures could show the plant growth since just having that rain. You can see all the new leaves,” Everett continued. “I went to a couple farmer meetings since the hurricane came through, and there’s very little crop damage. But the places where tornadoes did touch down look like a war zone with the building damage and trees shredded apart.”

Accomack County vegetable and grain producer David L. Hickman represents farmers in Hampton Roads and the Eastern Shore on the VFBF board. He said there was some saltwater flooding in fields on the bay side of the Eastern Shore, but that was fairly limited to northwestern Accomack.

“Overall, the rain was needed, so that probably offset the detrimental effects,” Hickman said. “There seems to be a fair bit of salt damage on trees and garden plants, which happens when you get strong winds coming off the ocean without enough rain to wash it off.”

As farmers grapple with market fluctuations and weather conditions outside their control, they’re happy to find a port in the storm, Everett said.

“We’re keeping our fingers crossed the weather will be conducive from here on out for an average crop anyway.”