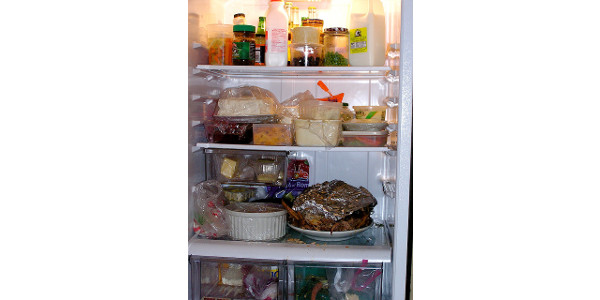 Leftovers are the best part of Thanksgiving. (liz west via Flickr)

MADISON — Zoey Rugel: Food safety during Thanksgiving. Today, we’re visiting with Barb Ingham, Extension Food Safety Specialist, Department of Food Science, University of Wisconsin-Madison/Extension, in the College of Agricultural and Life Sciences, and I’m Zoey Rugel. So, Barb, how should you be cooking turkey to ensure it’s safe to eat?

Barn Ingham: Well, the United States Department of Agriculture has safe temperatures for cooking of all meat products, including turkey. Turkey needs to reach 165 degrees Fahrenheit as an internal temperature and that’s instantaneous. We recommend people either use a thermometer, which is the best way to know for sure. Sometimes turkeys also come with a built-in pop-up thermometer and those do appear to be accurate. So, those could be used, as well.

Zoey Rugel: How should you be storing your Thanksgiving leftovers to make sure they’re safe to consume?

Barb Ingham: I think leftovers are the best part of Thanksgiving. So, we want leftovers to be dealt with relatively quickly. So, as soon as people are up from the meal. No more than two hours outside the oven before those leftovers are dealt with. So, they need to go in the refrigerator and they need to be in relatively shallow containers. About three inches deep is a good guideline. I think of a 13 x 9 pan as a good storage container, especially if it has a lid on it or something like that. You could use metal. You could use glass, or plastic, any of those, but the important thing is, whether it’s turkey that you’ve sliced off the bone, might be extra stuffing that you have, or gravy, or whatever, it needs to be in shallow containers and it needs to get into the refrigerator relatively quickly. So, refrigerators are doing double duty at Thanksgiving. They may be thawing the turkey and then they’re also safely storing those leftovers.

Zoey Rugel: What is the danger zone?

Barb Ingham: That’s the temperature range between 40 and 140 degrees Fahrenheit. So, when we take things out of the refrigerator, we place them into the danger zone. That’s the temperature where bacteria can start to grow, and they may grow relatively rapidly in the danger zone, especially in the high end of that temperature. Once we move things towards 140 degrees, we’re starting to cook things and so then that helps to create a level of safety that actually kills the bacteria. So, we want to keep things out of the danger zone. The danger zone also applies to thawing of your turkey. So, we don’t thaw turkey on the counter. We thaw it generally in the refrigerator, or you’re buying a fresh turkey that you would just keep in the refrigerator until it goes in the oven.

Zoey Rugel: Once leftovers are stored, what is the time frame you need to eat them within?

Barb Ingham: You have 3 to 5 days. So, if you think of Thanksgiving, for most people, being on Thursday, the leftovers need to either be consumed or frozen by the end of the weekend.

Zoey Rugel: How should you be reheating them?

Barb Ingham: Reheating is somewhat optional I guess, right? It’s certainly fine to eat a cold turkey sandwich, but if you do reheat something, maybe like stuffing or gravy, 165 degrees, which is the same temperature that we’re cooking turkey, is the safe reheating temperature, as well.