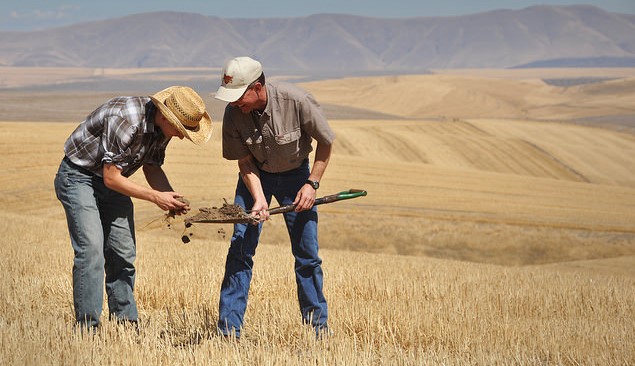 There is still a lot to investigate and several hurdles to overcome as soil scientists everywhere consider ways to tip the balance of the Earth's soil from carbon source to carbon sink, but according to these researchers, understanding this relatively little-known but highly significant carbon storage pathway is a start. (U.S. Department of Agriculture, Flickr/Creative Commons)

SANTA BARBARA, Calif. — One answer to our greenhouse gas challenges may be right under our feet: Soil scientists Oliver Chadwick of UC Santa Barbara and Marc Kramer of Washington State University have found that minerals in soil can hold on to a significant amount of carbon pulled from the atmosphere. It’s a mechanism that could potentially be exploited as the world tries to shift its carbon economy.

“We’ve known for quite a long time that the carbon stored on minerals is the carbon that sticks around for a long time,” said Chadwick, co-author of the paper, “Climate-driven thresholds in reactive mineral retention of soil carbon at the global scale,” published in the journal Nature Climate Change. How much carbon the soil can take and how much it can keep, he said, are dependent on factors including temperature and moisture.

“When plants photosynthesize, they draw carbon out of the atmosphere, then they die and their organic matter is incorporated in the soil,” Chadwick explained. “Bacteria decompose that organic matter, releasing carbon that can either go right back into the atmosphere as carbon dioxide or it can get held on the surface of soil minerals.”

Water plays a significant role in the soil’s ability to retain carbon, say the researchers. Chadwick and Kramer consulted soil profiles from the National Ecological Observatory Network (NEON) and from a globally representative archived data set for this first-ever global-scale evaluation of the role soil plays in producing dissolved organic matter and storing it on minerals. Wetter climates are more conducive to formation of minerals that are effective at storing carbon, therefore much of the Earth’s estimated 600 billion metric tons of soil-bound carbon is found in the wet forests and tropical zones. Arid places, meanwhile, tend to have a “negative water balance” and can thus store far less organic carbon. According to Chadwick, the findings suggest that even a small, strategic change in the water balance could drive greater carbon storage.

“That’s not as easy as it sounds, because water is dear,” Chadwick said, and in places where a shift in soil moisture could tip the water balance from negative to positive — like the desert — there’s not enough water to begin with. “So, it doesn’t actually make any sense to spread a lot of water out over the landscape because water is hugely valuable,” he added.

Climate change is another driver to consider. As the Earth warms, microbial activity increases and, in turn, so does the potential for carbon to be released back into the atmosphere at a greater rate than photosynthesis can draw it out. Increased evaporation due to a warmer climate also decreases the amount of water in the soil available to dissolve and move carbon to minerals deep below the surface.

There is still a lot to investigate and several hurdles to overcome as soil scientists everywhere consider ways to tip the balance of the Earth’s soil from carbon source to carbon sink, but according to these researchers, understanding this relatively little-known but highly significant carbon storage pathway is a start.

“We know less about the soils on Earth than we do about the surface of Mars,” said Kramer. “Before we can start thinking about storing carbon in the ground, we need to actually understand how it gets there and how likely it is to stick around. This finding highlights a major breakthrough in our understanding.”

Among the next steps for the scientists is to date the mineral-stored carbon in the soil to better understand how long these reactive (typically iron and aluminum) minerals can keep carbon out of the air. “Which is really important if we’re going to put effort into trying to store carbon in the soil,” Chadwick said. “Is it going to stay there long enough to matter? If we put it in and it comes out five years later, it’s not solving our problem, and we ought to be barking up a different tree.”