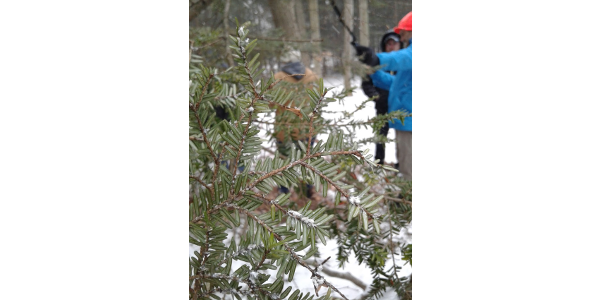 Since HWA can kill trees in under 10 years, local and state partners have been acting quickly to find and treat the pest. (Courtesy of Van Buren Conservation District)

PAW PAW, Mich. — With winter setting in, the Conservation Districts and Cooperative Invasive Species Management Areas, or CISMAs, throughout the state are ramping up efforts to detect Hemlock Woolly Adelgid before it wreaks havoc on our forests. Hemlock Woolly Adelgid, or HWA, is a forest pest that was introduced to the Eastern US over 50 years ago, but it was only found in significant populations in Michigan for the first time in 2015. Since HWA can kill trees in under 10 years, local and state partners have been acting quickly to find and treat the pest.

HWA, an insect native to Asia, was accidentally introduced on imported landscape hemlock trees, but is now spreading quickly through movement of firewood, wildlife, or recreational activities. The insect is very small, meaning that RVs, trucks, or hikers that brush against an infected tree could carry it to a new location. In its native range, HWA is held at bay through natural predators, which unfortunately don’t exist in North America. Because HWA has no natural enemies here in Michigan, hemlock trees are unable to keep up with the assault and die in 4-10 years.

“It’s been a huge effort along the Lake Michigan shoreline in the Lower Peninsula to get an eye on hemlock trees from New Buffalo to Mackinaw City,” says Eleanor Serocki, coordinator for the SWxSW Corner CISMA. “We’re just a small part of the team working to protect this important tree.” Serocki explains that hemlocks are important in Michigan not just because they are beautiful in landscaping, but also because they are key in protecting dunes from erosion and in creating habitat for sport fish and deer. “Michigan has over 130 Million hemlocks, and our forests, streams, and dunes wouldn’t be the same without them. They often grow along rivers and provide cooling shade that’s necessary to support cold water fish like salmon, meaning that we wouldn’t just be loosing a beautiful tree of they were gone.” Hemlocks are a popular tree in landscaping for their beautiful arching branches, dark green foliage, and small, distinctive needles.

HWA is a small, crawling insect that settles at the bases of hemlock needles to feed on the sugars the trees make. During the winter, HWA produces a thick, white, “cotton-y” covering making it easier to see. The winter is also the best time to check trees for infestation, since the insect is no longer in the “crawler” phase, meaning the chance of spread is much lower. Nonetheless, survey crews take stringent precautions to decontaminate boots, gear, and vehicles between locations to help prevent potential spread.

Though the tiny, cottony masses of HWA may be tricky to see, trained surveyors will be out along this coast offering free surveys to check hemlocks in parks, preserves, wood lots, and yards. “It’s important that we are as consistent and thorough in our surveys as possible, so we need to work closely with landowners throughout the coastal areas,” says Serocki. In order to find HWA, technicians look at the underside of hemlock branches for the insect. If there is a suspected infestation, the crew will collect a small part of the branch to be confirmed in the lab.

The surveys are focusing on properties within five miles of Lake Michigan, and are free to the public. If you are interested in having your trees checked for HWA, contact the survey team at 269-657-4030×5 or swmihwa@gmail.com. Surveys are quick, free, and can be performed with or without the owner present, depending on your preference.

The SWxSW Corner CISMA is a grant-funded organization working to help land owners, local governments, and concerned citizens understand and manage the invasive species threats in Berrien, Cass, and Van Buren counties. If you have invasive species on your property, or if you would like to have a CISMA representative speak for or work with your organization, please contact your county’s CISMA representative at any time! The CISMA and these surveys are funded in part by the Michigan Invasive Species Grant Program, through the Departments of Natural Resources, Environmental Quality, and Agriculture and Rural Development.

Keeping pests out of your home this winter
November 17, 2019