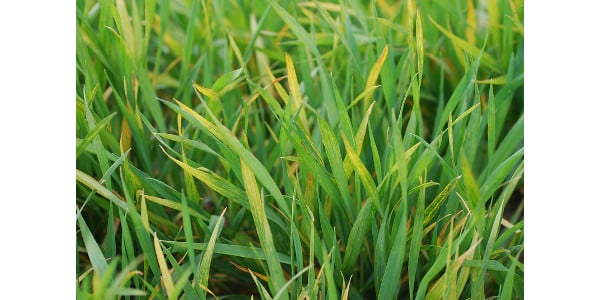 There is an increased risk of Wheat Streak Mosaic Virus in next year's wheat crop, due to a number of factors. (K-State Research and Extension via Flickr)

MANHATTAN, Kan. — There is an increased risk of Wheat Streak Mosaic Virus in next year’s wheat crop, due to a number of factors. There is no treatment for WSMV, so the best way to stop the spread is by controlling volunteer wheat and grassy weeds.
Losses from WSMV were down in 2018 & 2019 from a high in 2017. However, 2019 saw a tremendous increase in wheat streak mosaic complex, likely due to above normal populations of volunteer wheat. The five-year average statewide loss is 1.74% of the Kansas wheat crop, but localized affected areas can have much more dramatic losses. In 2017, losses reached 5.6% or $76.8 million in loss to Kansas wheat farmers.

Several factors lead to 2021 being another year of potentially devastating losses.

First of all, agronomic conditions during the 2020 wheat crop have a large effect on the amount of volunteer wheat that is emerging. Drought conditions last fall and this spring decreased kernel weight and likely increased harvest losses of grain. These smaller kernels might germinate into volunteer wheat, increasing the risk of severe wheat streak mosaic next year.

These can all increase the presence of volunteer wheat.

Secondly, some areas of the state have seen substantial rainfall over the past couple weeks. For example, areas in southwest Kansas have received three to four inches more precipitation than normal this July. While this moisture is certainly very welcomed in drought-stressed areas, wet weather through late summer often favors multiple flushes of volunteer wheat and also favors the growth of other grassy weeds that can also support moderate populations of the curl mites and virus. These weather patterns keep a lot more alternate host plants alive during the critical period when mites and virus would not have plants to survive on.

Thirdly, the farm economy is in a decline right now, so farmers may not want to invest the money in controlling volunteer. Farmers are enduring a multiyear slump in crop and livestock prices that is pushing many to the edge. With the COVID-19 crisis and loss of export markets, farmers are facing a plethora of challenges. According to “The Economic Impact of COVID-19 on U.S. Agriculture,” the decline in global growth has impacted farmers and ranchers in three distinct ways.

Despite these factors, farmers must control volunteer wheat now to stop the streak. The farm economy can’t afford to leave another $76.8 million in the field again next year.

Wheat Streak Mosaic Virus is carried by the wheat curl mite. Wheat curl mites will move off growing wheat as the green tissue dries down and dies. After moving off the existing wheat at or near harvest time, the mites need to find green tissue of a suitable host soon or they will die of desiccation.

If early-emerging volunteer is controlled shortly after harvest, that will help greatly in breaking the green bridge. However, if more volunteer emerges during the summer, follow-up control will still be needed.

A second management practice to limit the spread of the virus is to avoid early planting. Plant wheat after the “hessian fly free date” for your area. In some areas in western Kansas where there is no Hessian fly-free date, farmers should choose to wait until late September or October to plant their wheat. Planting after these dates will reduce the risk for the new wheat crop and reduce wheat curl mites from moving to new locations of wheat.

By following these management practices, we can stop the spread of wheat streak mosaic virus in next year’s wheat crop.

2021 KFAC Teacher of the Year winner