Home / Missouri / Stocker cattle could add value to your operation 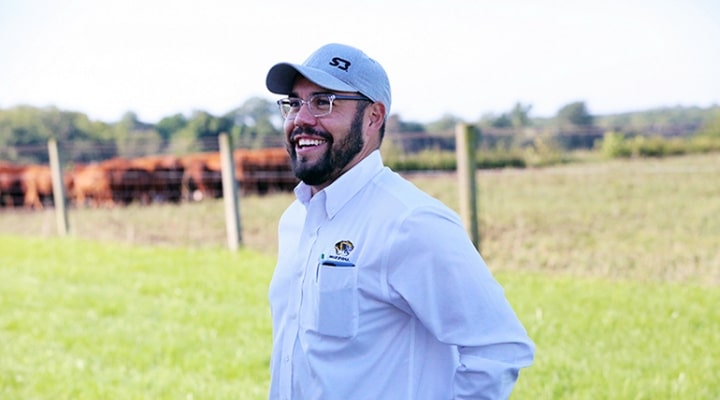 'The stocker cattle industry acts as a niche transition between the cow-calf operation, the feedlots and the packers by putting weight on calves as cheaply as we can,' says MU Extension beef specialist Eric Bailey. (photo provided)

COLUMBIA, Mo. – Stocker cattle make up just 12 percent of the 4.25 million head currently part of the beef industry in Missouri. But these cattle could add as much as $78 million to Missouri’s economy, according to the Missouri Beef Value-Added Study, a 2016 University of Missouri Extension report for the Missouri Agricultural and Small Business Development Authority.

“MU Extension has a goal of doubling the economic impact of agriculture while sustaining the state’s natural resources by the year 2030,” said MU Extension state beef specialist Eric Bailey. “Alternative uses of Missouri pasturelands like stocker cattle systems could go a long way towards helping us accomplish this goal.”

Stocker cattle systems put weight on cattle economically by using pasture forages during the early spring and fall as the main source of weight gain.

“When looking at the beef industry in Missouri, we’ve got the cow-calf operations where we raise calves and then the majority of those are destined to become steaks someday,” Bailey explained. “The stocker cattle industry acts as a niche transition between the cow-calf operation, the feedlots and the packers by putting weight on these calves as cheaply as we can.”

Bailey says this can be a game-changer for Missouri producers because less money would be invested in things like grain, hay, equipment and buying new land. Another benefit of stocker cattle is that the producer would not have to run cow-calf pairs year round. Farmers who have forage in the spring could run a set of stockers from early February to early July, and then they could look at running additional stocker cattle from October to the end of the year, depending on the quantity and quality of forage, Bailey said.

“I am taking a 500-pound calf and I am hoping to deliver a 700-pound calf who is ready to go into a feedlot at that time,” he said. “I am shooting for 100 days. And I am hopeful that I will put about 200 pounds of weight on them in those hundred days with minimal feed supplements.”

Producers interested in stocker cattle should visit with cow-calf producers in their area who want to add value to their farm by using available but idle land around them. Individuals can also contact their local MU Extension center with questions.

“Many successful stocker operations begin as custom grazing for an owner on a leased farm,” said Bailey. “That’s as low-cost of a way to get in the cattle business as I know.”

Editorial: Turn up the heat