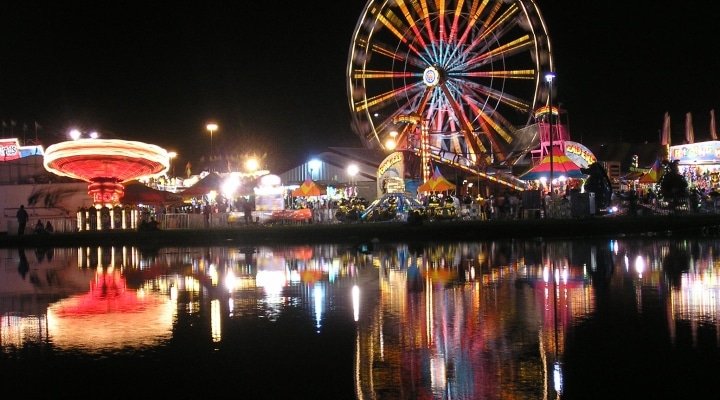 If you haven’t made it to the 32nd Annual Georgia National Fair in Perry, there’s still time. And lots to see, eat and experience!  Gates at the Georgia National Fair & Agricenter open each day at 10 a.m. through Sunday, Oct. 17. The fair ends each day at 10 p.m. followed by fireworks; note that entry into the fair is not allowed after 9 p.m. (photo by Andy Middleton, creative commons/flickr.com)

Georgia agriculture is showcased in the Georgia Grown Building daily from 10 a.m. -10 p.m., where you may be able to watch a cow giving birth and can see baby calves born at the fair and piglets nursing their mother sow.

There’s a pollinator greenhouse inside the building’s east door housing about 300 painted lady butterflies. The Georgia Grown program and Georgia Green Industry Association partnered with Everyday Farm & Garden in Lizella to highlight plants and trees that provide habitat to pollinators.

Be sure to drop by the Georgia Farm Bureau booth in the Georgia Grown Building to take your photo and post it on Facebook using the hashtag #GFBAtTheFair for a chance to win a fabulous gift basket. Join GFB or buy a new membership for a friend or family member and receive a t-shirt everyone is raving about.

Drop by the livestock barns or arenas to see 4-H and FFA members preparing their animals for dairy, beef, hog and llama shows being held at various times through Oct. 17.

The fair has been blessed with wonderful weather from the first day. After days of rain, the sun came out about an hour before the fair opened its gates at 3 p.m. on Oct. 7 and has continued to shine since.

“Welcome back. You don’t know how happy I am to be standing here because we have had some unprecedented times around here,” said Georgia National Fair & Agricenter Executive Director Stephen Shimp. “This fair celebrates everything that’s good about Georgia. The theme for our fair this year for me and our staff is Grateful. We’re grateful that we get to be here.”

Foster Rhodes, chairman of the Georgia Agricultural Exposition Authority, which oversees the Georgia National Fairgrounds & Agricenter, served as emcee of the ceremony. Rhodes, who has served on the authority since the first fair in 1990, recognized his fellow seven authority members for their efforts to represent the facility to the state legislature and public.

“During the next 11 days we will have over 5,000 exhibitors here pursuing their dreams as they show their livestock, and members of the general public will have a chance to enjoy quality family entertainment with concerts, carnival rides and delicious food,” Rhodes said. “Last year in the midst of COVID, we were unable to have the fair for the first time since it was held in 1990. We appreciate the governor and the many other state leaders who helped us continue operating.”

“Robins Air Force Base is proud to call Middle Georgia our home. We’re both better together.”

Col. Duarte noted that the base and fairgrounds are both located on former farms.

“This fair is built on the foundation started by a lot of great Georgians,” Kemp said, recognizing former Georgia Rep. Larry Walker and former Gov. Sonny Perdue, who attended the ceremony.

Kemp echoed the attitude of gratitude Shimp and Rhodes expressed.

“I’m glad it’s not last year, and I’m glad it’s not four weeks ago when we were experiencing the surge of the Delta variant,” Gov. Brian Kemp said while speaking at the fair’s opening ceremony.  “I want to thank our Agricultural Exposition Authority and the fair staff for persevering. There are a lot of people who would have just folded up the tent, but they persevered, and that’s what our whole state has been doing. We faced a worse-case scenario with not having the fair last year and the loss of revenue that meant for this facility, but Stephen and his staff found new ways to use this facility. We will be better for that even though it’s been a brutal year.”

The Georgia Agricultural Exposition Authority (GAEA) recognized the contributions Jack Spruill made in designing the Georgia Grown Baby Barn, which opened at the 2018 Georgia National Fair. Spruill, who recently retired as marketing director for the Georgia Department of Agriculture, visited numerous fairs across the U.S. with birthing centers to see how they were managed.

Spruill’s children Robert, Abby and Carol accepted a plaque on behalf of their father from the GAEA presented by GAEA member Emily Watson. Spruill was unable to attend the ceremony for health reasons.

Reithoffer Shows, which has provided the midway carnival rides for the Georgia National Fair since the fair began in 1990, is celebrating not only its return to Perry but also its 125th year of thrilling fair goers across the U.S. with its rides and carnival attractions.

“As proud as the authority members are of the Georgia National Fair, Reithoffer Shows feels the same way,” said Rick Reithoffer, whose great grandfather, Julius, started the family’s carnival business in 1896. “We are the oldest family-owned carnival in the U.S. still owned by the same family. We’ve grown with the fair. When we first came here, the fairgrounds was only about half the size as it is today. We’ve expanded the midway size three times since 1990. We’re now covering a mile of midway.”

In 2020, Reithoffer Shows only attended the Pensacola International Fair, Rick said, but the company employed its whole crew for all of last year in hopes that they would have some shows.

“We did a lot of maintenance work and refurbishment of rides so we would be ready when shows started again. It was a very difficult year for the amusement industry,” Rick said.

This year Reithoffer Shows has been to about 20 of the 32 fairs it is scheduled to attend.

“I think we’re going to have a record year here at the Georgia National Fair,” Rick said. “We’re glad to be back in Perry.”

Visit www.georgianationalfair.com for a full schedule of events, ticket information and a list of vendors.