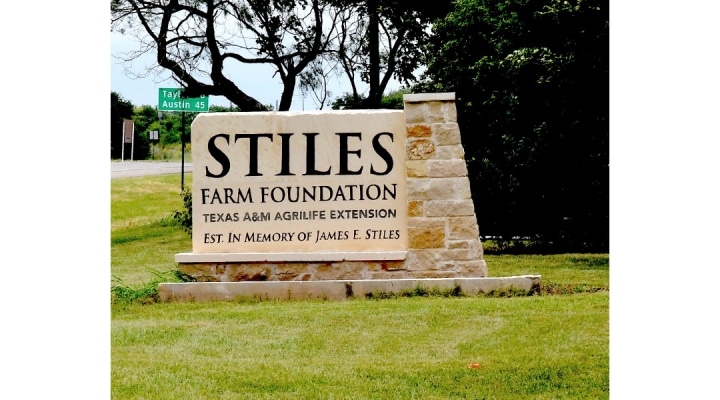 “It’s a huge blessing to be able to work here,” said Ryan Collett, AgriLife Extension farm manager, who resides on the farm with his family. “Farming is challenging, but there is no better way to raise a family. I’m blessed that I get to eat lunch with my kids and have them spend time with me on the farm.”

Collett is helping to carry out the mission that J.V. and H.A. Stiles set out some 60 years ago. The brothers sought to honor their father, James E. Stiles, by helping neighboring farmers and others throughout the Central Texas Blacklands region. They did this by turning the Stiles Farm into a demonstration farm to help producers learn about new farming practices.

In 1961, the Stiles Farm Foundation was established and became part of the Texas A&M University System. The annual Stiles Farm Field Day is the farm’s signature event during which AgriLife Extension specialists and Texas A&M AgriLife Research scientists showcase field experiments and interpret the findings to Blackland farmers.

With the city of Austin continuing to grow outward throughout Travis and Williamson counties, there’s pressure on agricultural farmland in the Blacklands.

“We try to look at agriculture as a whole,” Collett said. “You have to manage not only for profit, but also for the long-term health of the soil, forage and cattle. We also have our eye on the pressures of real estate as urban sprawl takes over farm operations in our area.”

He said the farm is continues traditional farming and row cropping while also determining how these can be done with fewer passes and less inputs.

“We are constantly looking at farm economics and how we can improve both the bottom line and the soil,” Collett said. “However, there is no easy answer. The Blacklands is a unique soil to manage. Many of our conservation practices we try come with their own set of new challenges. But that is why the farm is here. Like St. Paul says, ‘test everything and keep what is good.’”

“On the cattle side, we are really excited about integrating high-intensity grazing,” he said. “We go in and plant a cover crop, graze it, then pull the cows off and plant. By taking advantage of the grazing, the cows are recycling the nutrients into the ground with their manure, so we think there may be soil health benefit. However, at the same time, it is a lot of fencing, and you have to worry about providing water. It’s not an easy transition.”

Wildlife restoration on portions of the farm is being managed in areas that are not farmed, providing ecosystems for various bird species and other wildlife. Through a partnership with Texas Parks and Wildlife, public hunting for dove and duck is conducted annually. The farm has upwards of 1,000 visits per year during public dove and duck seasons.

The Stiles farm is also trying to provide education to young people who did not grow up on the farm.

“We started a college internship program a few years ago and, honestly, it has been one of my favorite projects,” Collett said. “We get students who come here with an ag degree but have no hands-on farm experience. But by the time their internship is over, they have become an integral part of our team. It has been so rewarding to see some of our interns go on to careers in agriculture.”

The sale of commodities grown on the farm, such as corn, cotton, sorghum, sesame as well as beef cattle, are its sole sources of income, providing annual funding for operations and staff. They also pay for facility upgrades such as improvements to office facilities, barns, working pens for livestock and other infrastructure.

It was 1963 when the first Stiles Farm field day was held. Fred Richter was on the Williamson County crops committee that helped organize the field day in collaboration with former farm manager Calvin Rinn.

The event grew in popularity as community members, such as the Taylor County Chamber of Commerce, came on board. Like today, cotton root rot was a problem for farmers in the 1960s. But thanks to Stiles Farm demonstrations, farmers found some success by continuous cultivation before planting. Cultivation practices through the years have been featured at numerous fields.

On the eve of the 50th field day event, Richter said another agricultural leap was made when farmers learned methods about conservation tillage, a practice featured at the Stiles Farm that helps producers preserve soil moisture and spend less per acre in field preparation.

“I haven’t missed one in 20 or 30 years,” he said. “You always pick up on something new each time. There’s always a diverse range of topics offered. They are always teaching and practicing soil sampling.”

Richter said strip-tilling and cover crops are practices that have been adopted by many producers, but the Blackland soil can be tricky when it comes to managing moisture around planting time.

“It has to be strip-tilled in the winter, around January, for planting to begin in February,” he said.

“I’ve always admired (the expertise) of Texas A&M AgriLife and reaped the benefits of their hard work,” Richter said.