Home » Stick with corn until end of May

MU Extension agronomist Bill Wiebold says farmers should not switch from corn to other crops or early maturing corn varieties because of rain-delayed planting. (Valerie Everett via Flickr)

COLUMBIA, Mo. — The wet and cold start to this year’s corn planting season bodes poorly for yields, based on research from the University of Missouri Extension.

But MU Extension agronomist Bill Wiebold says farmers should not switch from corn to other crops or early maturing corn varieties because of rain-delayed planting.

There is still time to get corn in the ground and expect good yields with other favorable conditions, says Wiebold.

Yield potential declines when planting is delayed during the first three weeks of May, according to Wiebold’s data. Researchers studied at least four hybrids in the five-year study. 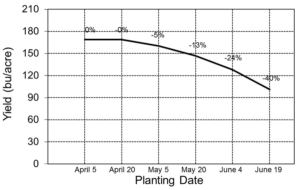 Switching to an early maturing variety almost assures yield loss. “Those early varieties are shorter and have less yield potential. An early variety might offer some advantage in reduced drying time at harvest, but that depends on the fall season,” Wiebold says.

Wiebold says farmers should base decisions upon the unique conditions of their farms and fields.

“Our data provide some optimism that reasonably high yield can be obtained when corn is planted in mid-to-late May,” Wiebold says. “However, yield potential is very strongly dependent on weather conditions in summer. For this reason, it is difficult to predict in any specific year what will happen to corn yield if planting is delayed.”

Soil conditions, rather than the calendar, dictate when to plant. Planting date concerns may rush farmers to get in the fields when soils are too wet.

For long-term soil health, wait until fields dry, Wiebold says. Traffic from heavy farm equipment on wet soils leads to compaction that reduces root growth, which is especially critical during drought years. “Once soil has begun to dry, patience is needed so that harm to developing corn roots is minimized.”

Delayed planting also increases risk from drought damage during pollination. Normal Missouri weather is drier and hotter in late July and early August than early July. This weather can interfere with pollination.

Wiebold says current wet and cool conditions put corn already in the ground at risk. Excess water and cool weather contribute to slow emergence, reduced stands and increased disease. Although rare, imbibitional chill injury occurs when cold water, taken in within 24 hours of planting, disrupts the organization of young cells during rehydration and can result in loss of seed vigor or even seed death.

The April 29 USDA Crop Progress Report said 45% of Missouri corn is in the ground with 7% emergence. Only 2% of soybean was in the ground. Both percentages are slightly behind last year’s progress and the five-year average.

However, last year’s historical weather pushed numbers well below previous averages. April 2018 in Missouri was the second-coldest on record going back to 1895. By April 8 of last year, USDA reported that only 1% of corn had been planted due to subfreezing temperatures and measurable snowfall. The previous four-year average had been 7%.