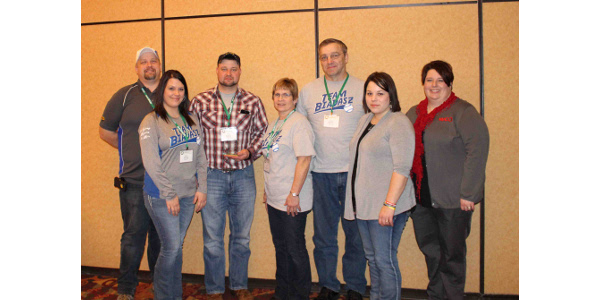 Steve Burclaw, (third from left), of Biadasz Farms in Amherst was honored as the inaugural WCO Employee of the Year at the 2017 Forage Symposium in the Dells. Burclaw is pictured with award sponsor Josh Harkenrider of New Holland Agriculture (far left), the Biadasz family and Kathy Vander Kinter, WCO past-president (far right). (Courtesy of Wisconsin Custom Operators, Inc)

DEFOREST, Wis. — The Wisconsin Custom Operators (WCO) honored an Amherst man for his hard work and dedication during a time of extreme grief and transition.

WCO’s first ever Employee of the Year award was given to Steve Burclaw, an employee of Biadasz Farms, on Jan. 25 during the organization’s annual meeting at the Forage Symposium at the Chula Vista Resort in Wisconsin Dells, Wis.

Burclaw has worked for Biadasz Farms since 2014 where he helps care for the family’s 900 starter-to-finish steer operation and assists with the custom farming business. On the morning of August 15, tragedy struck when co-owner Mike Biadasz was overcome by toxic gases while agitating a manure pit on the farm. Noticing that Mike’s truck and tractor were running, but he was nowhere to be found, Burclaw discovered his best friend and boss unresponsive.

In the wake of tragedy, work at Biadasz Farms continued – as all farm work does. The day after Mike’s death, a custom harvesting client had approximately 300 acres of hay cut for chopping. The weather forecast was predicted to be unfavorable in the coming days, so Burclaw did what all good farmers do and organized a chopping and hauling crew.

“Mike was the only person who operated the New Holland FR650 self‐propelled chopper. Steve took the initiative to recruit two friends to train him that day with no prior knowledge of operating the machine,” said Mike’s mother Diane. “Within two or three hours, Steve had mastered operating the chopper, but it was a very emotional day without Mike there by his side.”

WCO created this new award to honor an exemplary employee who demonstrates excellence in the areas of safety, efficiency, customer service, environmental stewardship and profitability of a custom farming or custom harvest operation.

“Custom farmers and their employees are highly skilled. They operate advanced equipment, maintain certifications and licensures and are front and center with clients,” said Kathy Vander Kinter, WCO past-president, who presented the award. “Steve is honest, courteous and faithful to the obligations to both customers and the crew. Despite tragedy, Steve continued the harvest in a safe and professional manner.”

Burclaw led the crew from fourth crop hay to corn silage then on to snaplage and combining with very few breakdowns and a constant commitment to communication with clients and the crew. He paid close attention to conditions, rules of the road and organized a first and second shift to avoid driver fatigue within the crew.

“Steve was the saving grace of Biadasz Farms,” said Diane. “Mike would be truly proud of Steve keeping his legacy going.”

A special thank you to New Holland Agriculture and Gruette’s Agriculture for sponsoring the award.

WCO is an organization comprised of individuals throughout the state who derive their income in whole or part from providing custom farming services. To learn more about the Wisconsin Custom Operators, Inc. including membership and event registration, go to wiscustomoperators.org or email info@wiscustomoperators.org. 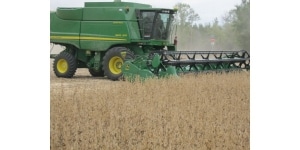 LAKE CRYSTAL, Minn. — Due to the high cost of investment in farm machinery, an ever-increasing number of farm operators are hiring other farm operators to provide some or all of their machinery resources for their farm operation. This is especially true with new and younger farm operators, as well as with children that decide […] 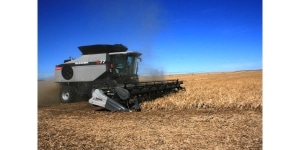 LAKE CRYSTAL, Minn. — Many farm operators provide some type of custom work or use of farm machinery to other farmers during the growing season, and payment is usually made following the completion of the harvest season. Sometimes, it can be difficult to arrive a fair custom rate for the certain farming practices, or for the […] 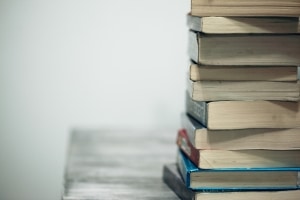