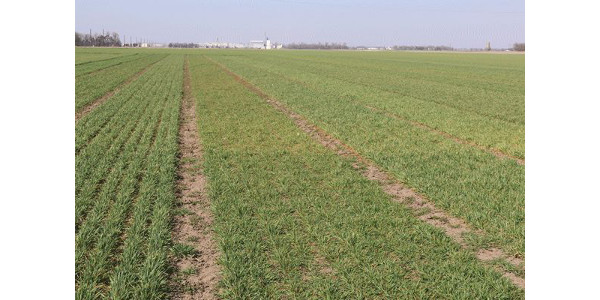 Researchers are working to help South American farmers, but they also want to make sure the disease does not reach the United States, where farmers grow about 50 million acres of wheat – the equivalent of 44 million football fields and enough wheat to feed hundreds of millions of people. (Courtesy of K-State Research and Extension)

MANHATTAN, Kan. — In 2009, ambitious and newly-minted with a master’s degree, Christian Cruz wanted to help wheat farmers in his native South America with a disease that has devastated the crop for nearly 30 years.

And then he got the chance to make his dream a reality.

The wheat blast fungus thrives in warm, wet environments, such as that found in Bolivia, Brazil, Paraguay and the northeast region of Argentina, where growers have struggled with it for more than three decades.

“It’s a serious problem and they urgently need research to help relieve the burden of the wheat blast disease,” Cruz said.

He began working on the project as a doctoral student at Kansas State University, which in 2009 had received $6.5 million from the U.S. Department of Agriculture’s National Institute for Food and Agriculture to study the disease.

Researchers are working to help South American farmers, but they also want to make sure the disease does not reach the United States, where farmers grow about 50 million acres of wheat – the equivalent of 44 million football fields and enough wheat to feed hundreds of millions of people.

“The best way to keep wheat blast out of the U.S. is to control it at origin,” Cruz said.

He has helped to establish research labs in Bolivia and Brazil, and leads research being done in wheat fields and greenhouses. He is testing wheat germplasm from all over the world, including U.S. varieties, for possible sources of resistance to wheat blast.

“I’m also trying to understand the epidemiology and ecology of wheat blast because although the disease was detected more than 30 years ago, we don’t completely understand its epidemiology,” Cruz said. “And that’s a serious situation, because if you don’t understand your enemy, you don’t know how to combat it.”

As an example, researchers aren’t quite sure where large amounts of blast fungal infectious units come from. Cruz said infested seed, plant debris and stubble, and secondary hosts such as weeds, could harbor the fungus. In addition, the crop itself could potentially be the basis where spores of the fungus are produced.

“We need to narrow down all these options and try to have a better understanding of what is the most important source from where we are getting all of these spores in the field,” he said.

In a newer project, researchers have tested fungicides over four years in Brazil and Bolivia to determine if they are safe and effective for controlling wheat blast. Cruz said those results should be published later this year.

He was part of the research group that identified a DNA segment – called 2NS – that provides resistance to wheat blast. The segment has since been used in wheat lines to protect the crop.

But, resistance breaks down over time, and 2NS has been used already in Bolivia, Brazil and Paraguay, Cruz said. “So, the question is how long is it going to provide the resistance that we want.”

Thus, the race is on for new sources of resistance. Cruz said that researchers at Kansas State University and Fort Detrick, Maryland have tested “approximately 800 wheat lines, and we have only been able to identify a few potential candidates for non-2NS resistance.

Kansas State University’s grant expires at the end of this year, and Cruz has accepted a position at Purdue University. He would like to continue his wheat blast work in the United States and South America.

“This research is definitely needed,” he said. “At this point, we are looking to continue with the project that we started in 2009, and by the end of the year, the hope is to identify and obtain new sources of money that will allow us to continue.”

Cruz said that much of the U.S.-based research on the disease has been conducted at the Biosecurity Research Institute on Kansas State University’s Manhattan campus. He credited several colleagues for their work on the project, including Barbara Valent, Jim Stack, William Bockus, Eduard Akhunov, Forrest Chumley, Tim Todd and Erick DeWolf.

“Our group has made tremendous progress, but I would say that we definitely need to keep an eye on this issue,” Cruz said. “We know that it’s not a problem of only a few countries in Latin America; we know that it’s already present in South Asia, a major region where wheat is produced.”

In 2016, a massive wheat blast outbreak was reported in 10 of Bangladesh’s primary wheat-producing districts, with a spread to new areas in 2017. The government responded by mandating that blast-affected fields be burned.

“Based on our current understanding, the blast fungus could find suitable climatic conditions in the United States,” Cruz said. “Therefore, research is needed in anticipation of the possible introduction of wheat blast into this country.”