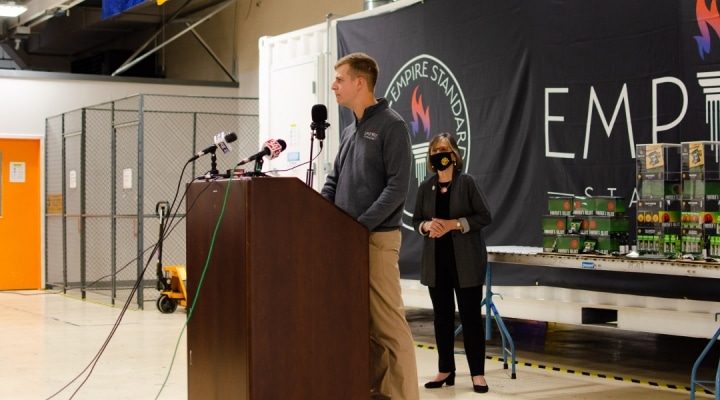 ALBANY — In six regions across New York last Tuesday, industry leaders hosted press conferences to emphasize the urgent need for comprehensive regulations. They called on Governor Andrew Cuomo to release regulations required by the Hemp Extract Law (Lupardo A8977/Metzger S6968), which was signed into law earlier this year and is expected to make New York a global leader in the hemp business. Press events were held in Binghamton, Buffalo, Lafayette, Manhattan, Milton, and Salem.

The regulations will fill a void. A regulatory void has existed on the federal level with the FDA refusing to regulate hemp extract products – causing confusion throughout the supply chain and allowing for fraudulent products to be sold without any adherence to quality standards. New York is poised to fill this void; affording farmers, manufacturers, and retailers new market opportunities while further legitimatizing a fast-growing sector of the economy. Lupardo and Metzger, co-authors of the Hemp Extract Law, see the release of regulations as necessary to move forward, saying:

“Everyone in the supply chain, including growers, processors, manufacturers, retailers and consumers, anxiously await release of the regulations so the program can be up and running by next January. Every day that goes by without these important details creates uncertainty in the market and lost business opportunities. New York is poised to have the safest, most consumer friendly program in the country, one that other states are already emulating. At a time when we are surrounded by bad economic news, this sector has the potential to be a real boost for struggling regions across the state.” – Assemblywoman Donna Lupardo, Chair of the Assembly Agriculture Committee.

“It is critically important that the State Department of Health release the draft regulations for hemp extract products, which will position New York to lead the way in producing and selling high-quality products and enable the industry to flourish. We need regulatory authorities to follow through on the process we set out in law, and create a model for the nation that draws on the significant experience and expertise we have developed right here in our state. In these challenging economic times, the New York hemp industry has been a beacon of economic hope and prosperity for both rural and urban areas.” – Senator Jen Metzger, Chair of the Senate Agriculture Committee.

Kaelan Castetter, Vice-President of the NYCGPA and CEO of the Castetter Cannabis Group was in Binghamton for a press conference at their headquarters where he emphasized the lack of clarity was restricting opportunities. “Every day I hear from entrepreneurs across the State who are excited about creating jobs and economic activity in this promising industry. Without clarity on licensing or even what products can be sold, many projects have been put on hold. The industry is looking for direction from Governor Cuomo and the greenlight to truly participate in this economic recovery” – Kaelan Castetter

In Lafayette, the regional beverage and apple farm powerhouse Beak & Skiff held their press conference where CEO Eddie Brennan said this: “I am proud to continue our family legacy here in Central New York with the addition of hemp operations. New York has the opportunity here to really be a leader not just regionally but across the country for common sense regulations. Further delaying these regulations will only serve to pause the plans that we and so many other businesses have across the State.” – Eddie Brennan

As harvest approaches, New York hemp farmers are looking to the release of these regulations to open new markets. Meg Southerland, a Washington County grower said this: “Washington County hemp growers are eagerly waiting for the regulations from the Hemp Extract Bill to be released so New York State can move forward in the hemp industry, protect consumers and comply with quality standards.”

The New York Cannabis Growers & Processors Association is a coalition representing farmers, manufacturers, and businesses from across New York State who are actively growing the New York the cannabis industry. The association has been engaged with key lawmakers, regulators, and Governor’s office over the past two years to advocate for the Empire State to become a national leader for hemp and adult-use cannabis.