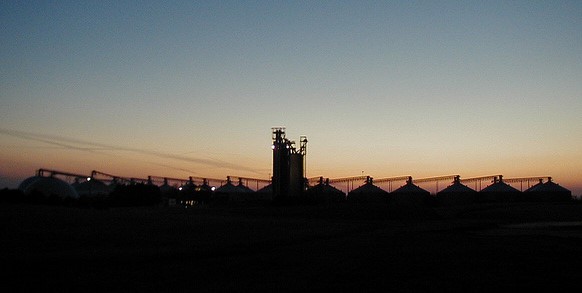 A grain and ethanol plant in Illinois. (tengrrl, Flickr/Creative Commons)

Proposed Volume Obligations are Promising, but Not Enough
More Must Be Done to Address Lost Demand for Renewable Fuels

Rob Larew, National Farmers Union (NFU) Senior Vice President of Public Policy and Communications, was encouraged by the volume increase but expressed concern about the fact that it does not address the misappropriation of “hardship waivers,” which has reduced the volume of renewable fuels in the transportation sector by as much as 1.6 billion gallons.

Larew issued the following statement in response to the proposal:

“It is promising that the EPA is planning to increase the volume of American grown and produced fuels in our transportation sector. However, the proposal does not do enough to account for the demand destruction of over a billion gallons of renewable fuels. The EPA should cease granting these waivers to prevent additional harm to the RFS. The agency must also find ways to reallocate gallons lost to the waivers or account for those gallons in the finalized RVOs in order to make up for harm already done.

“Additionally, the administration should look for ways to implement higher level blends of ethanol, such as E30, which expand markets for family farmers, boost rural economies, improve air quality, and lower fuel prices for consumers.”

The American Soybean Association (ASA) is pleased with the proposed biodiesel and advanced biofuels volumes released today by the Environmental Protection Agency (EPA), which opens the door for the growth of future biodiesel volumes.

In the rule, EPA calls for biomass-based diesel (BBD) volumes within the Renewable Fuel Standard (RFS) of 2.4 billion gallons for 2020, a 300 million gallon increase over the 2019 levels.

ASA President John Heisdorffer, a soybean producer from Keota, Iowa, applauded EPA, saying, “This increase supports a valuable, growing market for soybean oil. We have an increased capacity on the domestic market to meet the demand for renewable fuels blended into the nation’s fuel supply.”

Yet, Heisdorffer pointed out that proposed future increases in BBD volumes could be negated by the unwarranted waivers of RFS volumes that EPA has recently granted some oil refiners.

“The waived volumes need to be reallocated to ensure the RFS remains whole and that proposed future increases are meaningful,” Heisdorffer explained. “The biodiesel industry has the potential to support agriculture by creating jobs, diversifying fuel sources, and reducing America’s dependence on foreign oil. We encourage the EPA to continue supporting growth by limiting waivers that water down the benefits of these increased levels.”

The following is a statement from North Dakota farmer Kevin Skunes, president of the National Corn Growers Association (NCGA), on EPA’s Proposed Biofuel Requirements for 2019.

“It is encouraging that EPA is following Congressional intent and proposing some growth in the RFS volumes and continuing to propose an implied 15-billion-gallon volume for conventional ethanol. However, by continuing to allow retroactive exemptions to refineries, EPA will undercut the volumes in this rule, rendering the proposed blending levels meaningless. Furthermore, the proposed rule states that EPA will not consider comments on how small refinery exemptions are accounted for.

“EPA also had an opportunity to propose a remedy for the 1.6 billion gallons the agency has retroactively waived from the 2016 and 2017 volume requirements over the past year. NCGA believes that if EPA is going to grant retroactive waivers to cut volume requirements for certain refineries, then EPA must also reallocate those gallons to others, so the obligation to blend renewable fuels is not lost.

“Every gallon of renewable fuel blending waived by EPA reduces the clean air benefits of the RFS and costs consumers choice and money at the pump, particularly today when ethanol is considerably less expensive than gasoline.  EPA is also missing an opportunity to propose the removal of the outdated regulatory barrier limiting year-round sales of ethanol blends greater than 10 percent, such as E15.

“America’s farmers are experiencing their lowest net farm incomes since 2006, along with the increasing threat of a trade war. The EPA can provide more certainty to farmers by addressing the gallons already exempted, spelling out how future exemptions will be handled to ensure waived gallons are reallocated and moving forward with a stronger RFS that supports America’s farmers and their rural communities.”