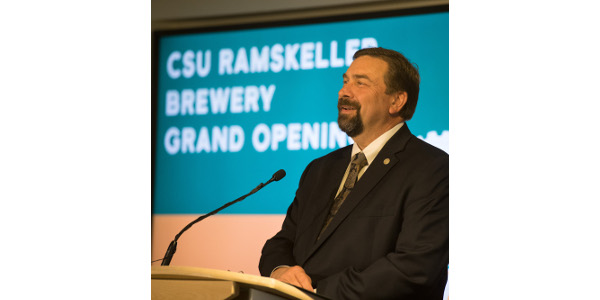 FORT COLLINS, Colo. — The long-awaited teaching brewery in Colorado State University’s Ramskeller was unveiled April 9 when students, donors and other project partners offered a toast to the future brewers who will be trained on the system.

Guests at a grand opening event included Pete Coors and a host of other representatives from the nearly two dozen companies that contributed in-kind gifts worth hundreds of thousands of dollars to create the world-class teaching facility.

“The craft brewing industry is a big part of Colorado’s economy,” CSU President Tony Frank told the crowd in the Lory Student Center. “And preparing people to be the next generation of the educated workforce in the economy of Colorado is one of the things that a land-grant university like CSU has existed to do, literally, since 1870.”

Frank also lauded the various campus and industry partners who made the project possible.

“This is here because people came together across different areas, for different reasons,” he said. “And whenever people come together, you generally see good things happen. I’m confident that projects like this one will have not only a lasting economic impact, but will have an impact on just how we interact with each other as human beings, and will help bring people together.”

Jeff Callaway, associate director of the Fermentation Science and Technology program in the Department of Food Science and Human Nutrition, thanked student center staff and CSU Facilities Management as well as the various industry partners and the students who worked on the project. Many of those students were in attendance, and Callaway encouraged the audience members to speak with them.

“Talk to them, get to know them, offer them jobs, that sort of thing,” Callaway said with a laugh. Then he led the group in a toast to the new brewery.

The facility features a brewhouse donated by Molson Coors. The contribution was shepherded by CSU alumna Jeannie Miller, who retired as the company’s vice president of global technical governance and innovation after more than three decades with the Denver-based brewing corporation.

When Miller, a member of the fermentation science and technology program’s advisory board, learned that a teaching brewery was in the works, she knew Molson Coors needed to be a part of it. She recalled an old brewing system that was sitting idle in a Vancouver, B.C., hockey arena, and worked with the manufacturer, Newlands Systems Inc. (NSI), to procure a new kettle, smaller tanks and several other improvements and refurbishments. She even helped coordinate delivery and navigate the customs process. The 10-hectoliter NSI system, capable of producing about 17 kegs per batch, arrived at CSU in December 2016.

Then students from the Walter Scott, Jr. College of Engineering went to work, helping fermentation science and technology students and industry partners set up the brewing system. They worked with CSU alumnus and systems engineer Dan Malyszko on the automation “brains” of the brewhouse as part of a senior design project called “Brewery Design and Automation” sponsored by Malyszko’s firm, Malisko Engineering. Callaway credits Malyszko with bringing together many of the industry partners who ended up contributing to the project.

The Department of Food Science and Human Nutrition is part of CSU’s College of Health and Human Sciences.

Where to send unsolicited seeds
August 6, 2020