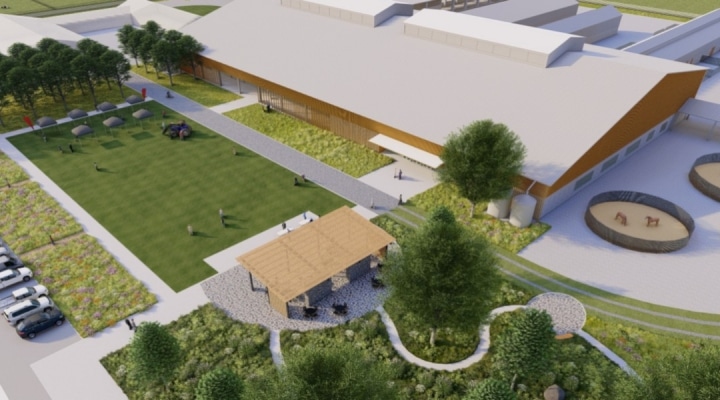 Construction of the Multi-Species Animal Learning Center is expected to begin within two years, with the timing hinging on fundraising efforts. The facility will be located on the Columbus campus of Ohio State at the Waterman Agricultural and Natural Resources Laboratory, which is part of the College of Food, Agricultural and Environmental Sciences (CFAES). (Courtesy Image)

COLUMBUS, Ohio — A tour might begin with a robot milking cows, then move to the barn where newborn piglets nestle beside their mother or hens have just laid eggs.

Pigs, chickens, cattle, sheep, horses and goats are coming to The Ohio State University’s Columbus campus, and the public will have a chance to not only see them but understand how they’re raised.

A new animal sciences facility is being planned where students will take classes in handling animals, among other subjects, and school children and the general public can see the day-to-day workings of modern livestock production.

Construction of the Multi-Species Animal Learning Center is expected to begin within two years, with the timing hinging on fundraising efforts. The facility will be located on the Columbus campus of Ohio State at the Waterman Agricultural and Natural Resources Laboratory, which is part of the College of Food, Agricultural and Environmental Sciences (CFAES).  Already at Waterman community gardens and a herd of Jersey cows have attracted visitors for decades.

As part of modernizing Waterman, a robotic milking system will be added to the dairy barn, allowing cows to freely choose when they’re milked. The system will collect a range of data, a key part of cutting-edge dairy operations. Along with the new animal center planned for Waterman, the Controlled Environment Food Production Research Complex is under construction, a facility dedicated to indoor food production, supporting efforts to grow fresh produce year-round in Ohio.

BRINGING THE PUBLIC AND LIVESTOCK TOGETHER

The new multi-species facility will replace outdated buildings, offering more chances for students and the public to learn about techniques used in modern-day livestock production and best practices for housing and caring for animals. The complex will be open for 4-H state competitions and Ohio State University Extension programs as well.

While the first floor of the building will include classrooms and animal barns, the second floor will welcome the public with a viewing area into those barns and interactive educational displays.

“Now more than ever, consumers are interested in where their food is coming from and how it’s raised,” said Jessica Pempek, an assistant professor of animal welfare in CFAES.

And there’s growing interest in the benefits of the human-animal bond, companion animals, and animal-assisted therapy.

MORE THAN JUST VISITING A FARM

For students within CFAES and outside the college, the multi-species facility will offer chances to see and interact with animals while learning about their behavior and care. The students too can learn about the many job opportunities in agriculture—on and off the farm, jobs they may not have thought of such as working as an animal nutritionist, agricultural economist, or a scientist investigating the genetic makeup of pigs or cattle.

“I think visitors will walk away having learned so much more than they may have from visiting just one farm,” Pempek said. “I’m hoping the facility will open the doors to future animal science majors and ultimately get more people involved in what we do.”

That includes students in all majors across Ohio State, anyone curious about farm animal production.

Now students at the Columbus campus drive to animal science facilities 9 miles away from the Columbus campus. That requires car trips, coordination, and standing outdoors in the middle of winter to work with the animals. Once the new multi-species facility is built, students will be able to step off a campus-area bus and onto the grounds of a modern farm.

Inside the multi-species facility, classrooms will surround an arena with space for 300 seats where animals can be brought out, without having to transport them to another facility. Faculty will be able to teach students in a classroom, then walk just steps away to where students can work directly with the animals, observing them and assessing their health.

Just talking about the opportunities students will have in the new animal facility gives Pempek goosebumps.

“We could be hands-on every single class if we wanted to,” Pempek said. “That’s when learning really happens.”

For students as well as the general public, the new multi-species facility will be a place where they’ll be able to both see the animals and better understand how they behave in groups.

At times, the dynamic is akin to that in a daycare. Put a group of pigs or cows or sheep together inside a facility and occasionally they can get bored or possibly irritated. Then they might pick on each other. But, like with young children, if you give them a ball or something else they can interact with, they’re less likely to spar.

In the animal sciences world, as in early childhood education, anything that actively engages animals is called an “enrichment” opportunity. Visitors to the new animal sciences facility will be able to see how mounted brushes allow sheep, goats, and cattle to rub against them, giving them more opportunities for grooming.

“It’s stimulation. It’s like getting a massage,” said John Foltz, chair of the CFAES Department of Animal Sciences.

Pigs like to play ball. A 6- or 8-pound bowling ball can keep them occupied pushing it around.

“It’s interesting to see animals in a modern farm setting to better understand where people’s foods come from and to understand the process,” Foltz said.

The aim is for every Ohio State student to visit Waterman and the multi-species facility at least once before graduating.

Students and other visitors to the multi-species facility can discover the research behind different management practices and animal grouping and enrichment strategies, as well as how these practices can affect how animals behave and how productive they are.

“One of our priorities is broader engagement with the public,” said Graham Cochran, associate dean of operations for CFAES. “The building will give us a lot of opportunities to expand and enhance what we do not only for our students but for K through 12 students and the general public.”

And a tour just might change people’s perception of how modern-day agriculture operates,  learning that a robot can both milk and feed cows while closely tracking each cow’s level of production, or how a pedometer placed on an animal’s leg can help identify early signs of disease based on changes in their behavior, such as more time spent lying down. Such discoveries just might spark interest for a job in some aspect of agriculture.

“On today’s farms, we need people who are a combination of an engineer and a computer scientist who can go in and maintain systems on farms. We need people who know finance and business. We need the whole gamut of talents to support animal production.”

And what better place to learn those skills than on a campus with two new facilities showcasing production agriculture with all its modern touches.

Goat and sheep webinar feeding for the age and stage of production
October 26, 2021