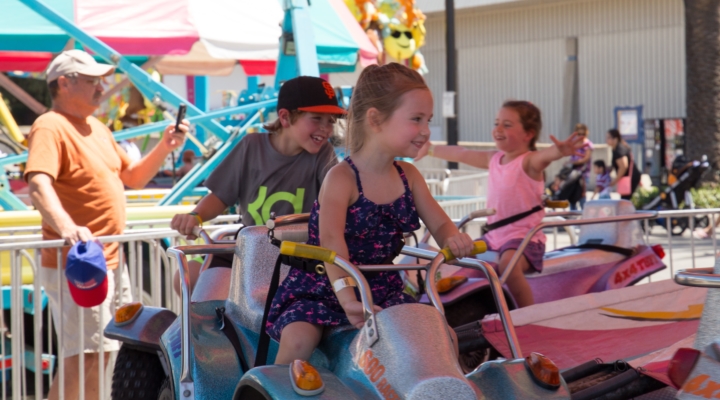 Butler Amusements, the CA State Fair vendor responsible for the amusement rides, also reported its highest weekend in history with sales of over $500,000 on Saturday, July 20 and more than $400,000 in sales for rides on Sunday, July 21, making it a $1,000,000 ride weekend. (California State Fair)

SACRAMENTO — The California State Fair ended its 2019 season with strong food, beverage and, amusement ride sales which is thanks in-part to an all-new food Festival Pass. The pass allowed Fair attendees to pick four items from over 30 different offerings ranging from mouth-watering appetizers, one-of-a-kind entrees, and to-die-for desserts from 30 food vendors at a low price of $28. Food sales from the Food Festival Pass generated roughly $380,000 in revenue alone.

“The Food Festival pass was popular every single day of the Fair,” says Wille Madaus, owner of Country Fair Cinnamon Rolls, whose Bacon & Pecan Cinnamon Roll won Best of Show in the Food Festival Competition. “We had our highest grossing Saturday ever and are up more than 20% this year.”

Barbecue sales, always a Fairgoer favorite, hit an all-time high with $1.3 million in gross sales while new, fresh food options such as the Fair’s first vegan stand, Frik’n Vegan, had a very successful debut. The food vendor has already confirmed plans to return to the fairgrounds next year. Non-profit organization Friends of the California State Fair program sold over 7,585 pounds of fruit during the California State Fair Farm.

“Food has a powerful way of bringing people together” said General Manager and CEO of Cal Expo & State Fair Rick Pickering. “We are grateful for the opportunity to provide a common place for Fairgoers of all backgrounds to come together and celebrate our state’s rich history, diverse cultures and some long-standing and new traditions that make California great.”

Overall, the total for food and beverage sales was $8.5 million this year, bringing local sales tax revenue to the city, county, and state over just 17 days of the Fair.

Butler Amusements, the CA State Fair vendor responsible for the amusement rides, also reported its highest weekend in history with sales of over $500,000 on Saturday, July 20 and more than $400,000 in sales for rides on Sunday, July 21, making it a $1,000,000 ride weekend. More than 100,000 people road the monorail and Skyride, taking in views of the entire fairgrounds and the surrounding areas from high above.

The California State Fair closed out its 2019 season — where innovation was a major theme — with an exciting Drone Light Show presented by DISH. Other novel ideas were created at the Fairgrounds, including Esports gaming tournaments every day of the Fair, the unique Bank of America sponsored Selfie Experience, and other new and exciting exhibits.

“This year’s fair brought together the beauty and innovation that demonstrates the very best of California,” said Pickering.
The state-wide Youth Mariachi Competition returned for a second year as part of a celebration of Mexican culture’s influence of the Golden State. The competition, held at the illustrious Golden 1 Stage, showcased talented youth mariachi ensembles from throughout the state. The competition gave participants an opportunity to win up to $5,000 in grants for their respective academy or school mariachi program.

An innovative Drone Light Show produced by The Great Lakes Drone Company, was followed by a traditional fireworks show that wrapped up the CA State Fair’s events. The combination of the old, beloved fireworks and the new drone light show symbolizes the innovation and nostalgic activities the Fair provides.

The CA State Fair provided opportunities for community engagement by providing free entrance to 10,000 military, veterans and first responders. Attendees on Mondays who provided three non-perishable food items received free admission during SMUD Giving Monday. Attendees donated a total of 31,000 pounds of food; all of which went to the Elk Grove Food Bank. Fair guests also had multiple opportunities to adopt an animal from Front Street and SPCA animal shelters.

“We look forward to continuing this strong tradition of showcasing innovation and have already begun plans to ensure the 2020 California State Fair can achieve newer and greater entertainment heights,” added Pickering.

Despite an extremely hot final weekend, Californians from all regions of the state were welcomed and enjoyed the Fair, and all its activities, for 17 days! Total attendance at the California State Fair increased from the prior year, up more than 5%, for a total of 601,761 happy Fairgoers.

To stay up to date with all things California State Fair, please visit www.castatefair.org