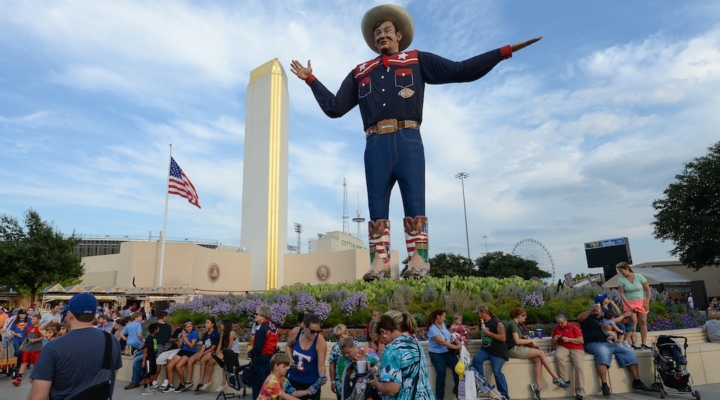 DALLAS, Texas — The State Fair of Texas aims to preserve its historical Fair Park home by helping to fund necessary improvements to its buildings and facilities. In 2018, the Fair is giving the City of Dallas $4 million to help pay for major maintenance and improvements at Fair Park, with the decision on how to allocate these funds at the discretion of the Park and Recreation director. In addition to the $4 million, the Fair will complete several other projects in Fair Park throughout the year as part of its annual effort to improve State Fair operations and the overall guest experience. The Fair loves to call Fair Park home and is proud to contribute to the preservation of its historic structures.

As part of its lease agreement with the City of Dallas, the State Fair and the Park and Recreation Department share excess revenues from each year’s Fair. The Park and Recreation Department then determines how and when their portion of the money is used. For the past three years, the Fair has voluntarily given the contributions to the City to be used at their sole discretion, although the Fair’s contract calls for the City to consult with the Fair on capital improvement projects at Fair Park. That totals $15 million given to the City for them to use at their discretion over the past three years. The Fair also currently pays more than $1.3 million per year in rent to the City of Dallas, with escalators in place throughout the contract.

In 2017, the Fair and the City shared more than $11 million. The Fair gave $6.5 million of this to the City of Dallas to use for Fair Park projects, with spending decisions at the discretion of the City. Then the Fair contributed another $4.5 million in 2017 to support additional projects in Fair Park, going toward the improvement of State Fair operations.

“Funding from the State Fair of Texas annual net revenues provide a critical supplement to the city’s general fund budget, by allowing us to address major maintenance needs at Fair Park,” said Park and Recreation Director Willis Winters. “We could not adequately maintain Fair Park without the financial assistance from the State Fair.”

Many people don’t realize that the State Fair is a nonprofit organization. The Fair’s main revenue source is admissions and parking from the event, as most of the coupon revenue goes to the concessionaires and ride operators, who set their own prices. (Read more about State Fair’s finances here.)

The Fair has a proud history of contributing to capital improvements and maintenance at Fair Park. In fact, each year the Fair upgrades and improves its own infrastructure to help improve the overall guest experience, by investing in such things as new seating areas, restroom facilities, guest service amenities, as well as plumbing, heating, and electrical work around the grounds – things that other groups hosting events in Fair Park often use and enjoy. Over the past three years, the Fair has contributed more than $30 million to capital improvements and maintenance at Fair Park, including the payments to the City of Dallas.

The Fair’s mission is to celebrate all things Texan by promoting agriculture, education, and community involvement through quality entertainment in a family-friendly environment. Helping maintain historic Fair Park is just one way the Fair supports the community.

Since its establishment in 1886, the State Fair of Texas has hosted a premier event in the location now known as Fair Park. After serving as the State Fair’s home for a whole century, Fair Park was officially designated a National Historic Landmark in 1986 because of its historical significance. With more than 130 years of shared history, the State Fair has maintained a deep-rooted connection to Fair Park and continues to call it home. As a longtime tenant of Fair Park, the State Fair operates under an agreement with the City of Dallas in which the Fair rents the property from the City for its event every fall. Each year, the net proceeds from the Fair are reinvested in Fair Park, in the form of capital improvements; given as scholarships to deserving youth throughout the state of Texas; used to support the Fair Park museum facilities and community outreach programs; and used to improve the State Fair’s operation to help put on the next Great State Fair of Texas.

The State Fair of Texas is a 501(c)(3) nonprofit organization and does not receive any government funding or support. Its nonprofit purpose is funded through the proceeds from the annual State Fair of Texas event. As a nonprofit organization, the Fair serves as an advocate for the community through its commitment to preserving Fair Park and continuing to build upon its legacy as a National Historic Landmark. The Fair’s ability to provide funds to the City of Dallas to improve Fair Park is a direct result of the success of its annual event. As a long standing Dallas institution, the Fair has a unique appreciation for the local support that makes such a big event possible every year. A successful Fair allows the organization to fulfill its mission of celebrating all things Texan by promoting agriculture, education, and community involvement through quality entertainment in a family-friendly environment. Thanks to the support of loyal fairgoers, the Fair is able to maintain an active role in the community, both locally and statewide.

Soil health: The ground we stand on