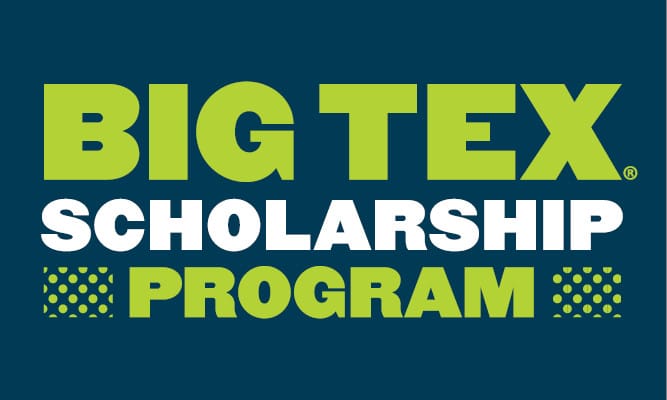 This year, the State Fair of Texas is awarding more than $1.24 million in new college scholarships, with 208 scholarships awarded. Since its establishment in 1992, the Big Tex Scholarship Program has continued to uphold the State Fair’s nonprofit mission of supporting agriculture, education and community involvement. (Courtesy Logo)

The Big Tex Scholarship Program has awarded scholarships to more than 2,700 students for a program total of more than $13.7 million. To honor its past Chairman Pete Schenkel, each year the State Fair awards college scholarships to selected applicants from six Dallas ISD high schools surrounding the Fair Park area – Irma Lerma Rangel Young Women’s Leadership School, Franklin D. Roosevelt, James Madison, Lincoln, North Dallas, and Woodrow Wilson high schools. In addition, the State Fair awards scholarships to selected applicants who have participated in youth livestock competitions at the State Fair of Texas. The Seasonal Employee Scholarship serves as a thank you to the Fair’s seasonal employees for their hard work and dedication to the State Fair of Texas.

Recipients receive a $6,000 grant, renewable each semester if the student meets the criteria for renewal. Students must attend an accredited college, university or trade school within the state of Texas. In order to qualify for scholarship renewal, recipients must enroll in, and pass, a minimum of 12 hours each semester. In addition, recipients must achieve a minimum 2.5 GPA their first semester and a 3.0 cumulative GPA for every semester thereafter.

The State Fair also awards several ancillary scholarships where outstanding students are awarded an additional $6,000 over four years to combine with the initial awarded $6,000 scholarship, for a total of $12,000 to put towards higher education.

The Fair congratulates all of these deserving students on their accomplishments and is happy to support them in pursuing their aspirations for higher education. The State Fair of Texas is a 501(c)(3) nonprofit organization and does not receive any government funding or support. Its nonprofit purpose is funded through the proceeds from the annual State Fair of Texas event. The net proceeds from the Fair are reinvested in Fair Park, in the form of capital improvements; given as scholarships to deserving students throughout the state of Texas; used to support Fair Park museum facilities and community outreach programs; and used to improve the State Fair’s operation. Help support the Fair’s mission of celebrating all things Texan by promoting agriculture, education, and community involvement through quality entertainment in a family-friendly environment at this year’s exposition. The gates will be open for the 2020 State Fair of Texas starting September 25 through October 18, with the theme “Celebrating Texas Icons.”

Farm to school in Seneca County: Back to school updates
September 22, 2020