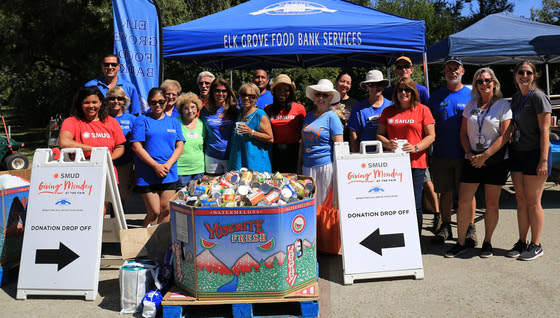 One heartwarming first, that we are especially proud of, was the SMUD Cares at the Fair Giving Monday. (Courtesy Photo)

SACRAMENTO — The California State Fair has wrapped up our 2018 season, which featured the theme “Don’t Miss A Moment.” As we reflect upon the 17 days of the Fair, which ran from July 13-29, we celebrated many first-ever moments that happened on the CA State Fairgrounds. The California State Fair is a place where memories are made which represents the best of what California has to offer; both nationally and globally. 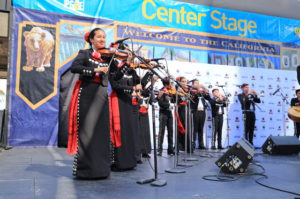 When it comes to competitions, the CA State Fair was proud to showcase culture and host its inaugural statewide youth mariachi competition. Ten ensembles throughout the state were invited to compete, ranging from first graders to college students, and our judges represented some of the strongest mariachi talent in California, including celebrity judge, Anthony Gonzalez, the voice behind Miguel in Disney’s Coco. In the end, Mariachi Tesoro de San Fernando (Los Angeles County) won first place and as part of their reward they played on stage with Mariachi Vargas de Tecalitlán to a sold out crowd. For a complete list of the winners, prizes, and competitors click here.

One heartwarming first, that we are especially proud of, was the SMUD Cares at the Fair Giving Monday. The CA State Fair partnered with local utility company SMUD and the Elk Grove Food Bank, each Monday of the Fair, to restock the empty food shelves that are common during the summer months. Fairgoers donated nearly 29,000 lbs. of food to help feed hungry families served by the Elk Grove Food Bank. In exchange for the food items the Fair provided free admission to the donors.

There were plenty of first-ever exhibits as well. Silent Disco was a popular “Cool Spot” to visit in Expo Center. Over 26,000 fairgoers danced with headphones to the songs of their choice, creating memories, and taking lots of selfies in the process. Tiny Homes were showcased during the first weekend at the Fair to a large, interested crowd. In the California Building, fairgoers enjoyed the new Life’s Big Ag-Venture game and the National Geographic exhibit, The Future of Food, which visually explained how California helps feed the world. Also sprinkled throughout the fairgrounds were selfie stations for guests to capture their best pics for social media. 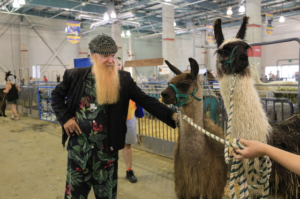 Other firsts happened over at Papa Murphy’s Park, which included concerts and being the new home of the CA State Fair Cornhole Championship on the final day of Fair. The S.M.O. Tour, Kidz Bop Live 2018 and ZZ Top with special guest George Thorogood and The Destroyers were the first three concerts held on the sports field during the CA State Fair’s 17 day run. Before his July 26 performance, ZZ Top’s Billy Gibbons toured the fairgrounds and got up-close to some of the CA State Fair’s furriest animals.

Food and drinks saw their share of firsts too. There were six new food vendors for Fairgoers to enjoy. The Speakeasy Whiskey Lounge was a new site that was home to live music and a chance to use a secret word (hence the term “speakeasy”) to get a special drink made. Over in the California Building, The Taste of California Experience Classes expanded to give fairgoers knowledge about wine, cheese, olive oil, and honey.

To help battle the heat of July, the CA State Fair made a conscious effort to help our guests find relief by creating 20 “Cool Spots.” These were either air conditioned buildings, fans with misters, full body misters, and shaded areas where a mobile device could be charged. As another way to stay cool and pay homage to the Oscar-nominated film “Lady Bird,” the Fair offered the “Lady Bird Experience Package” which was admission and unlimited rides on the “Log Ride.”

The Carnival area, which is operated by Butler Amusements, had some firsts of its own. The CA State Fair held its first-ever “Gender Reveal” on the giant Ferris Wheel (It was a girl!). Butler Amusements was also excited to announce it had its three largest ride days ever (including all the fairs and festivals they attend) during the last two Saturdays and final Sunday of the CA State Fair.

There were other great community outreach firsts too. The Rescue Dog Dive Day with Splash Dogs had 39 rescue dog participants; with the prize money being donated to a local animal shelter and two dogs adopted. Out At The Fair also became an official CA State Fair event this summer for the final day; featuring Out At The Races and a Diva Drop bungee-jump. 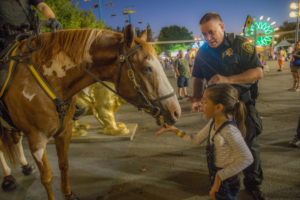 During Sacramento Navy Week, Admiral Scott Jones and CEO Pickering joined together in a touching wreath laying at Cal Expo’s 9/11 Memorial. This was even more significant because Admiral Jones grew up in Sacramento. The Cal Expo Police Department also connected with the CA State Fair community in a new and unique way. Most nights of the Fair, the public was able to feed the police horse and canines, or sit on one of the police motorcycles.

The 2018 California State Fair becomes a mini-city each day, and highlights the best of what California has to offer. Attendance ranged from 20,000 to 60,000 a day for a total of 572,250 this year. Extreme heat for 9 days of the CA State Fair contributed to a decrease overall in attendance; with guests spending over $8.5 million in food and drink purchases. While county fairs celebrate their local communities, the CA State Fair showcases the achievements of people state-wide. This year competitors entered the Fair from 57 of California’s 58 counties. Since many of the young competitors and exhibitors at the Fair can only travel to Sacramento in the summer, when they are not in school, the CA State Fair is held in July. We want to thank everyone who attended this year and extend an invitation to come out to the 2019 California State Fair.