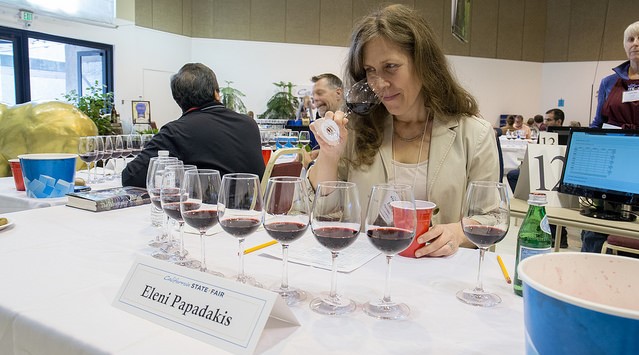 This year, 2,705 California wines from 691 wine companies were judged over three days. The Wine Judges are selected from respected winemakers, wine merchants, writers, promoters, and educators from across the country. Once again, the judging was led by Mark Chandler.

“Consumers should find lots to celebrate among our string of medal winners,” said Chandler.

And he’s right. In all, 98 double gold medals, 267 gold medals, 1,033 silver medals and 1,156 bronze medals were awarded. There were also 320 Best of Class of Varietal Awards, 24 Best of California Awards, 22 Best of Region Awards, 3 Best Micro Winery awards, the Best Value Award, the Golden State Winery of the Year Award and 5 Best of Show Awards.

A searchable list of the 2018 CA State Fair Commercial Wine Competition winners can be found here.

The awards for Golden State Vineyard of the Year, Wine Lifetime Achievement, and California All Stars were awarded during a Wine Judges Dinner at the Old Sugar Mill in Clarksburg on March 27th. See more about the winners and the awards here.

The commercial wine competition winners will also be presenting during the CA State Fair Taste of California Experience Classes July 13th – 29th. Fair guests can learn how to taste and pair the best California wines during these classes taught by wine experts. Registration for these classes begin in May at CAStateFair.org