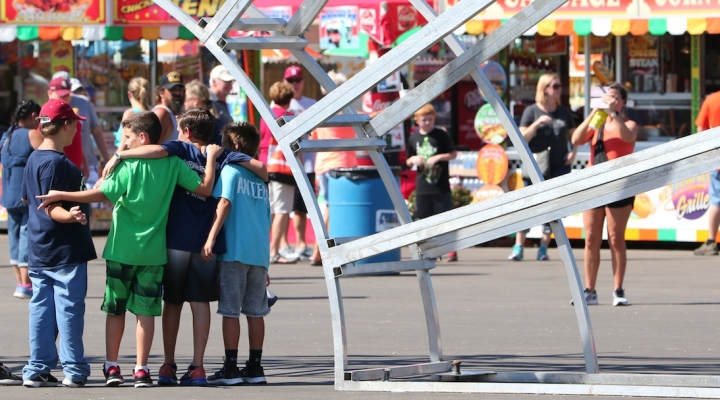 “It is with great pleasure that Doug, Gary and Mike are welcomed as valuable new members to our Board,” stated Norick. “Their input and enthusiasm will, no doubt, be instrumental in the continued progress and success of State Fair Park and the Oklahoma State Fair, being presented this year September 14 – 24.”

Lawler currently serves on the Board of Directors of the American Petroleum Institute, State Chamber of Oklahoma, Greater Oklahoma City Chamber, United Way of Central Oklahoma and Harold Hamm Diabetes Center. He is a Senior Advisor to the University of Oklahoma’s Price College Board of Advisors and a member of Rice University’s Jones Graduate School of Business Council of Overseers. Lawler graduated from the Colorado School of Mines in 1988 and from Rice University in 2002.

Gary Marrs was born and raised in Oklahoma City – attending Oklahoma City Public Schools, graduating from Northwest Classen High School. He joined the Oklahoma City Fire Department in 1972 and is the third generation in his family to serve the Oklahoma City Fire Department. He served for 30 years and was named Fire Chief in 1992. During his tenure as Chief he was instrumental in forming of the Special Operations work section which encompasses the technical rescue, water rescue, and hazardous materials teams. He also increased the activity in Paramedic level of training and staffing in the departmental response to Emergency Medical calls. He also initiated programs to get the firefighters more involved in their neighborhoods to help the department identify the needs of the community. He served as Incident Commander during the aftermath of the 1995 Murrah bombing and the 1999 F5 tornado.

He retired in 2002 and served as Assistant to the Mayor before running for City Council. He was first elected to Ward 1 in a Special Primary Election in 2004, and was re-elected to full terms in 2005 and 2009.

He is very active in the community serving on numerous boards and commissions including Leadership OKC, Youth Leadership Exchange, YMCA, and the American Red Cross. He served on the Red Cross board for many years, and served as the Chairman of the Board for two years. He also served as the President of the Board for the Arts Council of Oklahoma City and the Committee of 100.

He is an Air Force Vietnam veteran. He and his wife Judy have a daughter and two granddaughters.

Farney obtained his Bachelor of Science degree from Southern Nazarene University, Bethany, and has earned the designation of Certified Hotel Administrator from the Educational Institute of the American Hotel and Lodging Association, Washington DC.

Mike and his wife Cindy have been married for 22 years and are proud parents of 4 beautiful girls.

In addition to re-electing Ron Norick as chairman, the Board also re-elected the following slate of officers: David Thompson, vice chairman; E. Carey Joullian IV, vice chairman; G. Rainey Williams, Jr., treasurer; Timothy J. O’Toole, President & CEO. Shannon Crossley, corporate secretary, was also re-elected. At the recommendation of the Nominating Committee, the Board also appointed David Griffin to the Honorary Board in recognition of his outstanding service to the Oklahoma State Fair over the past few years.

Oklahoma State Fair, Inc., is an official Adventure Road Travel Partner, which means we’re part of the best destinations you can find on I-35 between Oklahoma City and the Texas border. Use the hashtag #MyAdventureRoad on Facebook, Twitter and Instagram to share your experiences when you are at State Fair Park. For more, visit AdventureRoad.com.

Special event announcements and general news for the 2017 Oklahoma State Fair will be released as information becomes available. Share your Fair memories and stories with us by using #okstatefair and #BiggerBetterBestOK. To stay up-to-date on all the Fair Fun, visit www.okstatefair.com, find us on Facebook, follow us on Twitter and Instagram, and download the official Oklahoma State Fair Mobile App available in the App Store and Google Play Store.

National Peanut Board to set direction