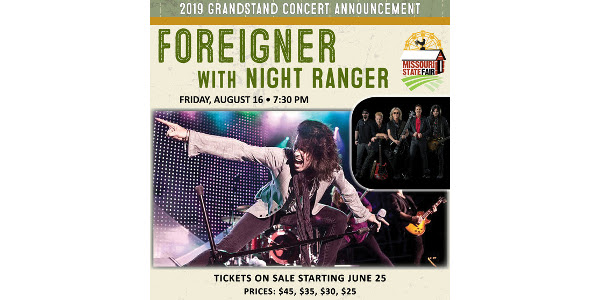 Founded in 1976, Foreigner’s debut album produced hits “Feels Like the First Time,” “Cold As Ice” and “Long, Long Way From Home.” The album Double Vision followed, as did a string of hits like “Urgent,” “Juke Box Hero” and “Waiting for a Girl Like You.”

With more than 17 million albums sold worldwide, Night Ranger continues to expand their ever-growing fan-base. Their string of best-selling albums and hits include “Sister Christian,” “Don’t Tell Me You Love Me,” and “When You Close Your Eyes.”

“We are excited to kick off this first round of concerts with this great rock show,” said Fair Director Mark Wolfe. “This is the first of our eight concert announcements to come as we finalize our line-up for this year’s Fair.”

Tickets for the concert start at $25 and will be on sale to the public starting June 25 through Etix. The Fair will offer a presale to registered Fair Fans. Sign up for free on the Fair’s website.

The 2019 Missouri State Fair will be held Aug. 8-18 in Sedalia. Additional acts, special events and promotions are expected to be announced in the coming weeks. For more information about the Fair, visit mostatefair.com.