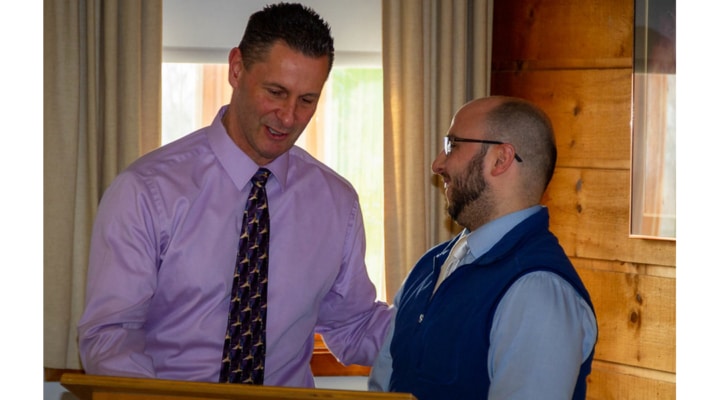 CONCORD, N.H. — The state-based agencies of the U.S. Department of Agriculture (USDA), to include the Natural Resources Conservation Service (NRCS), Farm Service (FSA) and Rural Development (RD) agencies hosted the first State Technical Committee (STC) meeting of the new decade by briefing various stakeholders at the Society for the Protection of New Hampshire Forests’ conservation center in Concord January 23, 2020.

The committee, which typically meets three to four times a year, discusses changes and priorities for the state regarding the department programs and conservation concerns.  The focus of this meeting was to highlight the use of current programs, as well as to provide updates on the implementation of the 2018 Farm Bill programs that are currently either open to public comment or policies just now starting to be fielded.

Committee attendees were able to ask questions regarding the new policies and program changes and were provided answers where possible. Many of the programs are still in development and most are currently open for public comment. The department leaders were quick to point out that, currently, the rules are interim in nature pending the outcome of that public comment period. Attendees were encouraged to participate in the public comment process for any changes they felt strongly about.

This occasion also formally marked the last committee meeting for the current N.H. state conservationist, Rick Ellsmore.  “As most of you probably already know, this is going to be my last state tech’ meeting here in New Hampshire. After 35 years with USDA, I’m retiring in March,” explained Ellsmore in his closing remarks.

Ellsmore, who has served as the state conservationist for New Hampshire since 2010, has been at the forefront of conservation efforts in the state over the last decade.  Many of the attendees have worked closely with him during that time and a lot of congratulatory salutations were exchanged.

“I want to thank all of you for your participation here, I couldn’t have had a more successful and highlighted career,” Ellsmore elaborated. “This is all I’ve ever done, I graduated college in 1986 … I started working on Monday morning after graduating on a Saturday, so retirement is going to be different for me.”

Ellsmore started as a student trainee in 1985 while studying forestry at the University of Maine. His service in New Hampshire includes being the district conservationist in the Epping field office before leaving for other opportunities in the Midwest and Washington and ultimately returning as the assistant state conservationist for operations in 2008.

“It’s been a wonderful 35-year ride,” said Ellsmore.  “Twenty-two of those years have been in New Hampshire and it’s definitely been the best part of it – although Ohio, Maine, Iowa and D.C. are nice,” he laughed.

A native New Englander from Machias, Maine, Ellsmore was easily able to relate to the conservation concerns of the people of New Hampshire and has served the agency to further conservation efforts for NRCS for the duration of his career.

His knowledge and candor in relating to the customers in the region also caught the attention of the congressional officials he worked with.

Senator Jeanne Shaheen of New Hampshire, who has worked with Ellsmore regularly since 2009, had a letter formally presented to Ellsmore after his concluding remarks thanking him for his service and wishing him well on his next endeavors:

“I want to thank you for your years of service to the people of New Hampshire, and your dedication to conservation. Your expertise and commitment have been a true asset to our state. Throughout your career you have interacted with countless farmers and residents to provide technical assistance and promote sustainability,” the letter stated. “My staff and I always appreciated how approachable you were when constituent questions arose and how eager you were to answer them quickly and knowledgeably. While your retirement is certainly well deserved, your strong presence and effectiveness will surely be missed. I hope that the challenges and rewards of your career provide you with a unique sense of accomplishment and I wish you the best of luck as you enter this new chapter of your life …”

Ellsmore looks forward to spending time with his family after retirement but hasn’t ruled out returning to his passion of conservation in some unofficial capacity in the future.

The position being vacated by Ellsmore is slated to be filled by an interim acting state conservationist until the federal hiring process can determine a suitable candidate.