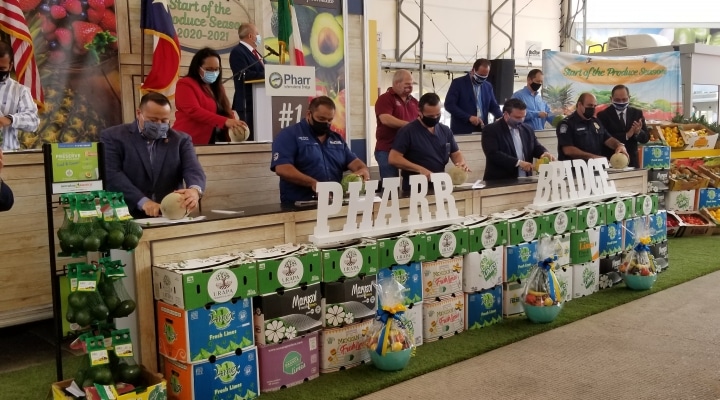 The ceremonial “Cutting of the Fruit” was executed at the end of the event, with sponsors, city officials and State Representative Sergio Muñoz, Jr all present. (Courtesy Photo)

PHARR, Texas — A celebration for the “Start of the Produce Season 2020-2021” was held on October 8, 2020 at the Pharr International Bridge, which seems appropriate for a bridge that crossed 190,174 fresh produce truckloads in FY2020 – more than any other international bridge in the US. Attendance was lighter this year in order to respect Social Distancing orders in place throughout Hidalgo County, but present were individuals representing the fresh produce industry, officials from the City of Pharr, and Texas State Representatives to witnesses the bustling activity the Pharr International Bridge exuded. 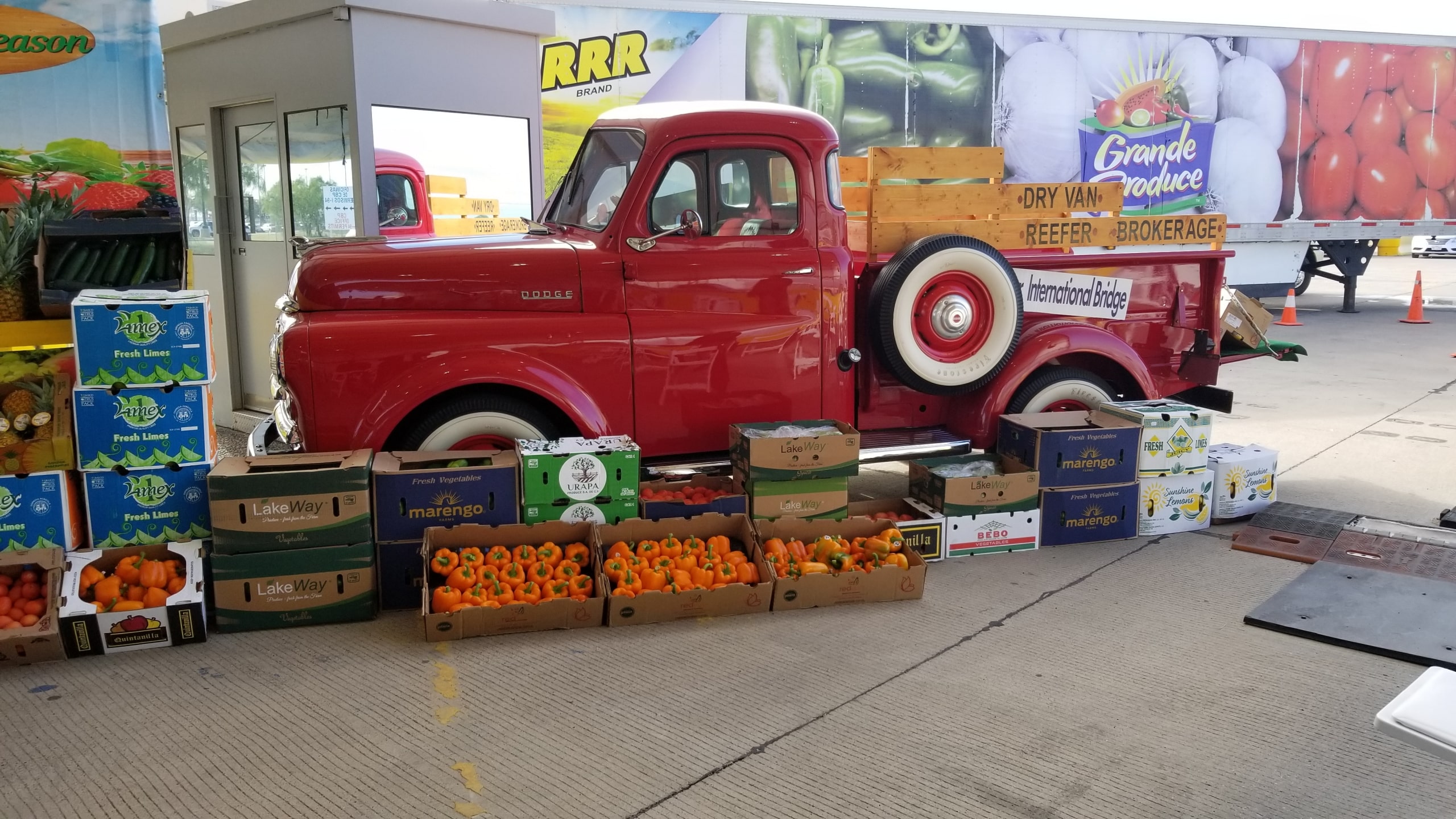 “We partner with so many organizations, because we know the fastest way to get things done is through partnerships. The STAC Program, South Texas Assets Consortium, is how we pay for overtime hours to CBP Agriculture Inspectors,” said City of Pharr Mayor Ambrosio Hernandez. “We don’t see Pharr as isolated. What works for Pharr we will gladly share with all other bridges in the Rio Grande Valley for their expansion, because we are a team.” Mayor Hernandez was highlighting a vital partnership between TIPA, CBP, STAC bridges and the University of Texas Rio Grande Valley (UTRGV), which has put in place 10 paid agriculture interns. These university students will learn valuable work skills while assisting CBP to process commercial produce shipments. The program aims to build a pool of qualified and local individuals that any of the numerous bridges crossing fresh produce in Texas can access to fill personnel openings.

Over 65% of all the fresh produce crossing from Mexico through Texas is crossed at the Pharr International Bridge. Plans are already in place to expand the bridge by another 4 lanes in order to expedite crossings. “In addition to the bridge expansion, three other projects are up for bids on October 2021,” said Luis Bazan, Pharr Bridge Director. “Under the DAP 16 [Donations Acceptance Program] these projects include an expansion of the dry dock, a cold inspection facility and the regional agriculture lab and training center.” Funding is already approved for these projects, according to Mr. Bazan. 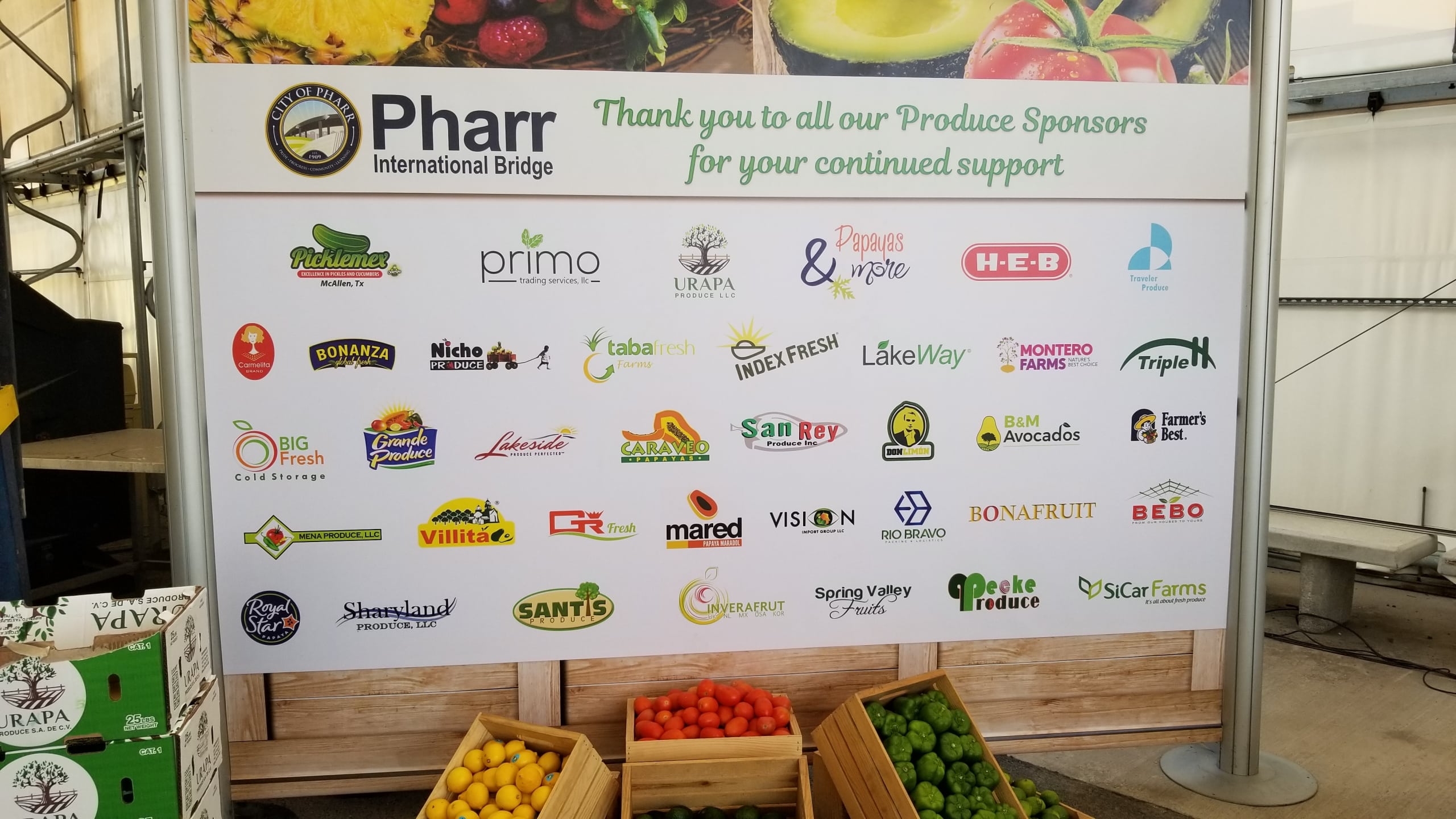 The ceremonial “Cutting of the Fruit” was executed at the end of the event, with sponsors, city officials and State Representative Sergio Muñoz, Jr all present. “This is always a great event and brings a lot of attention not only to the bridge that crosses the most fresh produce in all of the United States but it also brings a lot of attention to the industry and specifically the partnerships and economic-unity that is a key to the fresh produce infrastructure in our state and throughout North America.” says Dante Galeazzi, President & CEO of the Texas International Produce Association.

Founded in 1942, the Texas International Produce Association (TIPA) promotes, advocates, educates and represents the nearly $8 billion in fresh produce that is either grown in the state or calls Texas the first point of US-arrival for North American distribution.