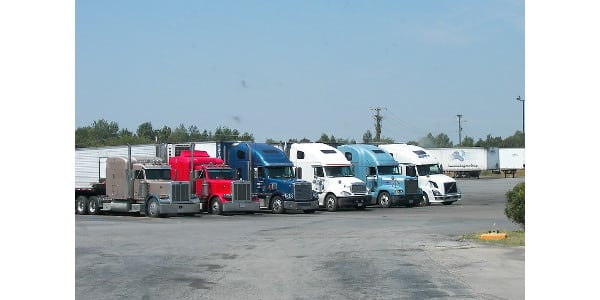 The Vector System enables fleets to dramatically accelerate the achievement of carbon reduction goals such as those outlined in Oregon’s Executive Order 20-04 (EO 20-04), introduced by Governor Kate Brown in March of 2020. (greeblie via Flickr/Creative Commons)

Optimus Technologies’ Vector System is an EPA-compliant, bolt-on, advanced fuel system that upgrades medium- and heavy-duty diesel trucks to run on 100% biodiesel even in harsh environments and sub-zero temperatures. The Vector System technology is available as a bolt-on upgrade for existing trucks, addressing the significant carbon emissions generated from the nearly 14 million medium- and heavy-duty trucks* in use today, and is also available on new truck purchases via ship-through partnerships.

The Vector System enables fleets to dramatically accelerate the achievement of carbon reduction goals such as those outlined in Oregon’s Executive Order 20-04 (EO 20-04), introduced by Governor Kate Brown in March of 2020. EO 20-04 directs the state to take action to reduce greenhouse gas (GHG) emissions and states that, “emissions from the transportation sector are the single largest source of GHG emissions in Oregon.” To protect the public health, safety, and economic vitality of the State of Oregon, the goal of EO 20-04 is to facilitate reducing GHG emissions in Oregon to at least 80 percent below 1990 emissions level by 2050.

As one of the largest haulers of biodiesel in the State of Oregon, Star Oilco is committed to sustainability. “Over the last 85 years, we’ve been passionate and committed to the future of fuel. We wanted to provide low carbon solutions to fleets today who are wrestling with de-carbonization, offering the Pacific Northwest fuels that are better for our environment, economy, and diesel equipment.” said Mark Fitz, owner of Star Oilco, “20 years ago we pioneered biodiesel being available in Oregon and Washington, we are ecstatic to get back to running B100 in our own trucks, it just makes sense.”

By implementing The Vector System in their distribution trucks, Star Oilco is already far exceeding the 2050 GHG emission reduction targets — today. Star Oilco is not just setting an example in Oregon, but sending a message nationally that cost-effective and easy to implement solutions to reduce carbon emissions are available now. Waiting until 2050 to address carbon emissions in heavy-duty vehicles will result in 29 years worth of additional greenhouse gas accumulation in the atmosphere. Not content to wait on the commercial viability of electrification or hydrogen in heavy-duty applications, Star Oilco is leading the charge toward a sustainable, low-carbon future by using B100 and The Optimus Vector System.

Typically derived from recycled cooking oils and waste fats, as well as agricultural byproducts, 100% biodiesel achieves net-zero carbon emissions due to the biogenic sources it is refined from. Biodiesel is the nation’s first domestically produced and commercially available advanced biofuel and provides significant engine, environmental, and economic benefits. The biodiesel fuel being used and distributed by Star Oilco is locally produced by Renewable Energy Group, Inc., (Nasdaq: REGI) North America’s largest producer of biodiesel, at their biorefinery in Aberdeen, WA – less than 150 miles from Star Oilco’s location in Portland, further reducing the lifecycle carbon footprint of the fuel.

​While electrification is commonly perceived as the singular solution to reducing carbon emissions in transportation, in reality, the technology is not yet commercially viable to deploy on the scale needed to achieve significant carbon reductions in the trucking sector. Electric vehicle technology, battery capacity, and long charging times cannot meet the demands of the duty-cycle necessary to power large vehicles like these fuel distribution trucks efficiently. Diesel technology is essential for these functions, and utilizing 100% biodiesel allows for the continued use of the core engine technology and existing refueling station infrastructure, while leveraging the carbon savings of a more sustainable fuel.

​“Optimus provides near-zero carbon solutions that are available for emission reductions on any diesel engine today. GHG emissions are a significant global challenge that won’t be solved overnight, but setting targets that are 20-30 years away doesn’t align with the urgency in which these problems need to be addressed. We’re excited to partner with Star Oilco to showcase that cost-effective solutions exist to reduce carbon emissions immediately. Star Oilco, an 85 year old family-owned oil company, is demonstrating they are a leader in the global transition to low-carbon fuels and we’re proud that they have selected our technology to support their efforts.” says Colin Huwler, CEO of Optimus Technologies.

Optimus Technologies is a clean energy technology company based in Pittsburgh, Pennsylvania. Optimus manufactures The Vector System, an advanced fuel system technology that enables diesel engines to operate on 100% biodiesel. The Vector System is designed for medium and heavy-duty fleet applications where emissions reductions are challenging or impossible to achieve in a cost-effective manner through other means. The Vector System integrates into existing operations to facilitate a seamless transition to low-carbon fuels.

Optimus’ Vector System is in use with leading municipal and private fleets throughout the country such as DC Public Works and ADM. Use of The Vector System has enabled these fleets to achieve near-zero carbon emissions, while also reducing their fuel and fleet operating costs.

Star Oilco is a Portland, OR based oil company founded in 1936 through the marketing and sales of sawdust, coal and wood as heating fuels. Over the years, the company began to specialize in petroleum products. In 1984, Oilco was acquired and the company became Star Oilco and quickly grew to become one of the leading full-service, petroleum providers in the Pacific Northwest. Star Oilco is the leading choice when it comes to fleet-fueling solutions for businesses in Oregon and Washington.

Made from an increasingly diverse mix of resources such as recycled cooking oil, soybean oil and animal fats, biodiesel is a renewable, clean-burning diesel replacement that can be used in existing diesel engines. It is the nation’s first domestically produced, commercially