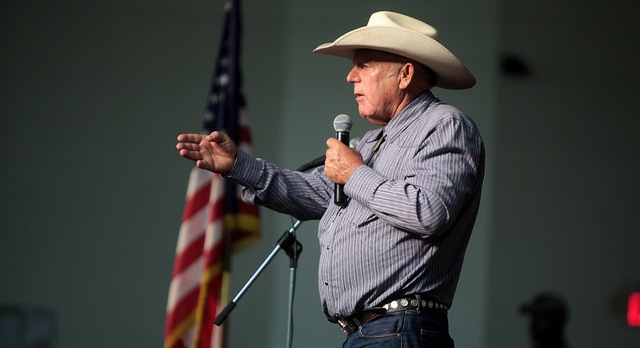 To conservative followers, the plainspoken 71-year-old Cliven Bundy is an icon. But conservation advocates characterized Bundy as an outlaw who escaped justice. (Gage Skidmore, Flickr/Creative Commons)

LAS VEGAS (AP) — The Nevada rancher who led a 2014 armed standoff with government agents spoke Wednesday saying that it’s up to people in states, not the federal officials, to manage vast expanses of rangeland in the U.S. West.

To conservative followers, the plainspoken 71-year-old Cliven Bundy is an icon. He told them he’s angry after spending nearly 23 months in jail before and during a trial that ended in mistrial three weeks ago. He was freed Monday.

But conservation advocates characterized Bundy as an outlaw who escaped justice, and called for federal land managers to again round up and remove Bundy cattle from what is now Gold Butte National Monument.

“The Trump administration is coddling violent zealots and preventing the public from feeling safe to enjoy our new national monument,” said Patrick Donnelly, Center for Biological Diversity director in Nevada.

Leaders of a coalition of public lands supporters said separately that they believe people are afraid to visit the national monument near the Bundy homestead outside Bunkerville.

“The Bundys used guns to express their displeasure with the government,” said Ralph Williamson, senior pastor at the First African Methodist Episcopal Church in North Las Vegas and leader of the local Faith Organizing Alliance.

Williamson called Bundy’s release without a jury decision “the exact opposite of safety and a clear lack of justice.”

Chief U.S. District Judge Gloria Navarro dismissed the criminal case against Bundy, his two sons and a Montana militia leader. The judge cited what she called flagrant misconduct by federal prosecutors who failed to fully share evidence with defendants.

The Bureau of Land Management began rounding up Bundy cows in April 2014 after obtaining court orders against Bundy for 20 years of failure to pay grazing fees and penalties to the federal government.

“Bundy is still an outlaw when it comes to his grazing actions, and the prosecutorial failings in the Bunkerville case do not excuse him from the decades of unauthorized livestock trespass on our public lands,” said Greta Anderson, deputy director of Western Watersheds Project.

To cheers from supporters outside Las Vegas police headquarters, Bundy said that if the U.S. Bureau of Land Management comes again for his cattle, he’ll ask the Clark County sheriff to protect his life, liberty and property.

“I graze my cattle only on Clark County, Nevada, land,” he said, using what he has dubbed his 15-second defense. “I have no contract with the United States government.”

“Mr. Bundy has his own beliefs and has the right to express his opinion,” the sheriff said, adding that Las Vegas police “will continue to follow the law.”

Some Bundy case analysts think his states’ rights message could find support from President Donald Trump, who has moved to open public lands to industry, than it did under former President Barack Obama.

Ian Bartrum, a University of Nevada, Las Vegas, law professor who has been writing about the Bundy case and federal land policy, said he sees a blend of beliefs between Trump supporters and Bundy backers.

But Bundy said this week he doesn’t recognize federal authority, no matter who is president.

Advocates who fought for years to protect habitat for threatened species including the desert tortoise are angered that Bundy cattle are still grazing in Gold Butte. Obama declared the sprawling and scenic range 90 miles (145 kilometers) northeast of Las Vegas a national monument in December 2016.

WEYBRIDGE, Vt. — Ninety-seven acres along the Lemon Fair River have been protected for water quality and wildlife habitat and 160 acres of adjacent farmland have been conserved, the Vermont Land Trust (VLT), Vermont Housing & Conservation Board (VHCB), and USDA – Natural Resources Conservation Service (NRCS) announced today. The land along the river was […]