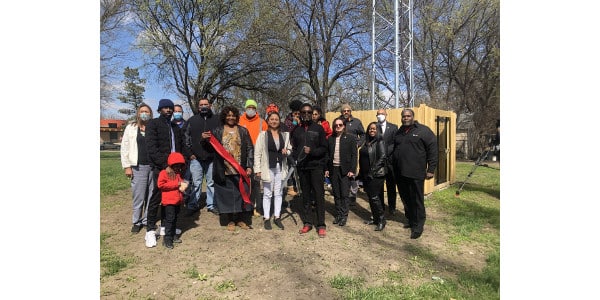 LINCOLN — It felt like the start of something bigger as residents, Tribal representatives and project leaders gathered in Macy yesterday to cut the ribbon on the area’s first high-speed broadband internet connection, made possible by a grant from the State of Nebraska under the CARES-funded Remote Access Rural Broadband grant program.

“Broadband has become like a utility. This service will give individuals in Macy and Thurston County a more level playing field for accessing education, remote work and other capabilities that are critical today,” said William King, whose nonprofit, Media King Communications, was responsible for bringing the project to life.

King says his telecom company submitted three Remote Access Rural Broadband applications in order to make sure underrepresented groups were not left behind. Macy, which is part of the Omaha Indian Reservation, has about a thousand residents, over half of whom are below the poverty line.

“Someone needed to be an advocate,” he said. “I wanted to be sure that no one was left out of this opportunity.”

A native of North Omaha, King says he was inspired by his parents and his life experiences to stand up for those in need of a voice. After creating his own public access television show out of college, he began his own radio station from his home using equipment he purchased at a discount with the help of friends and donors who saw his passion for advocacy. Today, he operates 95.7 The Boss FM and One 1690 AM out of Omaha, which serve the entire metro area.

“We were North Omaha’s first black-owned radio station in more than 25 years,” he said.

With four new service towers, today’s achievement will provide state-of-the-art wireless speeds of up to 100 Mbps in an area where it can be hard to find a good cell signal. His company will be able to extend free WIFI to places like the school and community center, opening doors to everything from out-of-the-classroom learning to digital doctor’s visits and remote work.

“This is only phase one. Our next goal, for which we’re seeking funding, is to start actually providing free devices, including laptops, so more people can actually access the service. Eventually we want to offer computer and technological literacy courses, which we think could be taught to older adults by local youth.”

Today’s ribbon-cutting marks just one of dozens of service debuts slated to occur around the state as the result of Remote Access grant funding, which was awarded last spring. In all, DED administered more than $29.5 million in grants under the program to 60 applicants, who represent thousands of miles of service territory. Gov. Ricketts subsequently announced a statewide campaign through which he intends to expand high-speed broadband to every citizen of the state.

“Expanding high-speed broadband throughout our state, especially in our rural communities, is one of our major priority areas and an essential ingredient for eliminating barriers to economic opportunity and quality of life,” said DED Director Anthony L. Goins. “We are thrilled to see Macy gain top-of-the-line internet access and achieve a new world of possibilities as result of the CARES Act. I would like to congratulate Mr. King and his organization for doing such a great job bringing this grant to fruition.”

For now, King says he and the Tribe are working together on the next steps, and the company looks forward to continuing to build the relationship.

“We’re going to provide the best customer service possible, and that means we’re going to listen to our neighbors,” he said, going on to describe the philosophy that drives his ambition to provoke change:

“I call it creating positive havoc. When you bring positivity it always creates havoc, because the world is so used to negativity that it’s the norm. At the end of the day, it’s about loving your neighbors and not just listening, but acting.”

Celebrating and savoring Nebraska beef
May 12, 2021