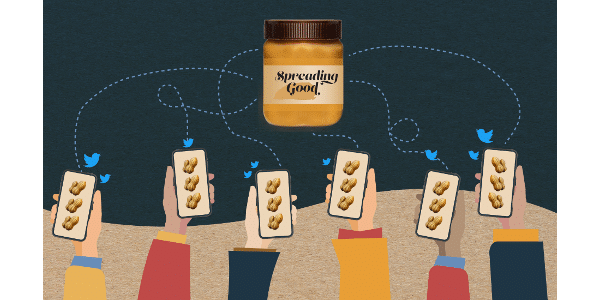 ATLANTA — The first activation as part of NPB’s year-long Spreading Good consumer campaign – “Substantial Emoji” – wrapped up on Mar. 31 and proved to be a success with consumers and brands alike. Launched on Jan. 24 for National Peanut Butter Day, NPB gave the peanut emoji substance by turning all emoji used on Twitter into real peanuts for peanut butter donations to U.S. food banks.

Within just one week of launching, NPB hit the initial goal of five million peanut emoji used on Twitter, and subsequently raised the goal. At the conclusion of the campaign, there were a total of 5,655,609 peanut emoji tweeted. This translates to roughly 10,500 jars of peanut butter. However, with the high demand for peanut butter in food banks due to the pandemic, NPB will proudly be donating the full pledged amount of 12,000 jars.

Consumers were eager to participate in the campaign by tweeting peanut emoji themselves and sharing with friends and family. We also saw some of our brand partners get in on the campaign by encouraging their own followers to get involved. Finally, an unexpected yet strong advocate for the campaign was the BTS ARMY, fans of the worldwide South Korean pop (K-Pop) band, who shared the campaign on social and urged their loyal followers to participate. At the conclusion of the campaign, nearly 10 million people were exposed to the program as a result from all campaign efforts.

The National Peanut Board thanks our partners at Crazy Richards, Georgia Grinders, JIF, Peanut Butter & Co., and Tara Foods for helping fuel the Substantial Emoji donations to food banks.

Now more than ever, Spreading Good has the opportunity to give back to our communities in a big way. While the remaining activations will be shifted to remain relevant during this time, NPB still aims to donate up to 17,000 pounds of peanuts and peanut butter total at the conclusion of the year-long campaign. More details about the Spreading Good campaign can be found on NationalPeanutBoard.org. And of course, follow @PeanutsHere on Twitter and Instagram to join NPB in #SpreadingGood this year.

How atrazine regs. influence the environment