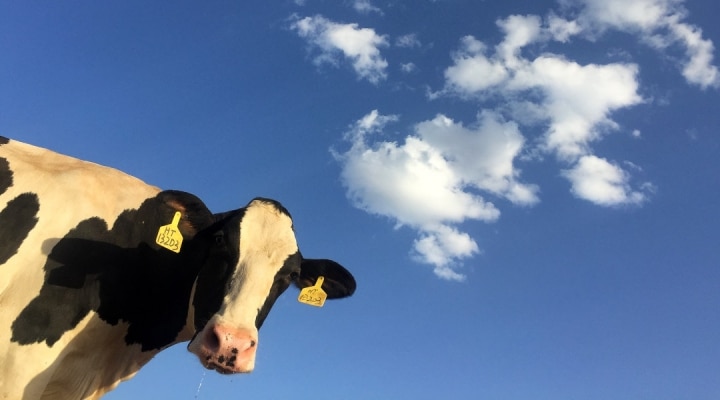 All of the rather comical cow counting had a serious purpose, though: to measure the interactions between wildlife and livestock where their ranges meet or overlap. (Photo by Ryan Song on Unsplash)

SANTA BARBARA, Calif. — Cows don’t seem to have a whole lot going on most of the time. They’re raised to spend their days grazing in the field, raised for the purpose of providing milk or meat, or producing more cows. So when students in UC Santa Barbara ecologist Doug McCauley’s lab found themselves staring intently at satellite image upon image of bovine herds at Point Reyes National Seashore, it was funny, in a “Far Side” kind of way.

“There were about 10 undergrads involved in the project, spotting cows from space — not your typical student research and always amusing to see in the lab,” McCauley said. They became proficient at discerning the top view of a cow from the top view of rocks or the top view of other animals, he added.

“After about eight months, we ended up with more than 27,000 annotations of cattle across 31 images,” said Lacey Hughey, an ecologist with the Smithsonian Conservation Biology Institute who was a Ph.D. student in the McCauley Lab at the time, and the leader of the cow census. “It took a long time.”

All of the rather comical cow counting had a serious purpose, though: to measure the interactions between wildlife and livestock where their ranges meet or overlap. Roughly a third of the United States’ land cover is rangeland, and where these grazing areas abut wildland, concerns over predation, competition and disease transmission are bound to arise.

Such is the case at Point Reyes National Seashore, a picturesque combination of coastal bluffs and pastureland about an hour’s drive north of San Francisco. As part of a statewide species restoration plan, native tule elk were reintroduced to the park’s designated wilderness area in the 1990s, but they didn’t stay in their little corner of paradise for very long.

“Some of them actually ended up swimming across an estero and establishing this herd — which is known as the Drake’s Beach Herd — near the pastoral zone of the park, which is leased to cattle ranchers,” said Hughey, the lead author of a collaborative study with the University of Nevada, Reno, that appears in the journal Biological Conservation. Cattle fences don’t stop elk either, she said; they can easily cross or break through them to enter pastures. The situation was also somewhat unique in that the Drake’s Beach elk live in the area year-round, thanks in large part to the stable climate, so grazing pressure on the land is constant.

“So we were wondering, how do elk and cattle co-exist in this landscape?” Hughey said. “The story between elk and cattle is actually pretty complex. We know from other studies that elk and cattle can be competitors, but they can also be facilitators. We also didn’t know very much about which habitats elk preferred in this part of the park and how the presence of cattle might influence an elk’s decision to spend its time in one place over another.”

The researchers set out to answer these questions with two large datasets generated by the park — GPS monitoring data from collared elk, and field-based transect surveys of the elk. What was missing, however, was information on the cows.

“We knew quite a bit about where the elk were, but we didn’t have any information about where the cows were, except that they were inside the fences,” she said. Knowing the precise number and location of cows relative to the elk herd would be necessary to understand how both species interact in a pastoral setting.

“Because the elk data was collected in the past, we needed a way to obtain information on cattle populations from the same time period. The only place we could get that was from archived, high-resolution satellite imagery,” Hughey said. Hence, the satellite cowspotting.

Their conclusion? Elk have acclimated to cattle at Point Reyes by avoiding cow pastures in general and by choosing separate foraging sites on the occassions that they co-occur. Taken together, these findings suggest that elk select habitat in a manner “that reduce[s] the potential for grazing conflicts with cattle, even in cases where access to forage is limited.”

In addition to helping shed light on the ecological relationship between cows and tule elk at Point Reyes, satellite imaging can also define their areas of overlap — an important consideration in the assessment of disease risk, the researchers said.

“There’s a disease of concern that’s been found in the elk herd and also in the cattle, called Johne’s disease,” Hughey said. The bacteria that cause it can persist in the environment for more than a year, she added, so even though cows and elk rarely share space at the same time, there is still a theoretical risk of transmission in this system.

According to the researchers, the satellite imaging technique is also widely applicable to other areas on the globe where livestock and wildlife ranges overlap.

“The issue of livestock and wildlife being in conflict is a major challenge in a bunch of different contexts in the U.S. and beyond,” McCauley said. “It has been surprisingly hard to figure out exactly how these wild animals share space with domestic animals.”

These new methods, he said, “will have a transformative impact on understanding how livestock use wildlands — and how wildlife use grazing lands.”

Next stop: Kenya and Tanzania.

Working with the National Geospatial Intelligence Agency, Microsoft AI for Good, University of Glasgow, and University of Twente — and thanks in large part to the data generated by those cow-tracking UC Santa Barbara undergrads — Hughey and colleagues are training an algorithm to detect and identify animals in the plains of East Africa, such as wildebeest and, of course, cows.

Funds aid in recovery from the financial impacts of COVID-19