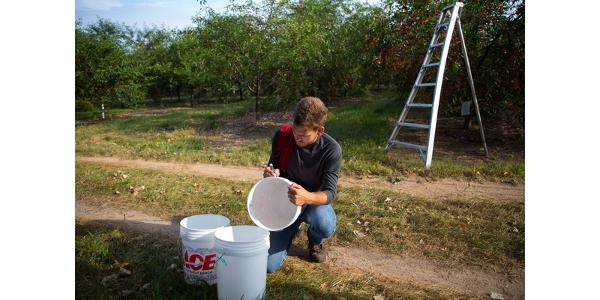 EAST LANSING, Mich. — 2019 was generally a successful year in spotted wing Drosophila (SWD) management for sweet and tart cherry farmers in west central Michigan. Although the tart cherry crop was light and the season was late, processors report that the quality of both sweet and tart cherry fruit from the region was outstanding and growers were able to move through harvest quickly. The economic angle of the tart cherry business is about as tough as things come right now, but beating SWD in 2019 represents a positive note to an otherwise tough situation.

The management success of the season might lead some to believe that part of the success could have been due to lower numbers of SWD in the area, but population data from the past three seasons indicate that this season actually represents the highest cumulative catch in the region over the past three years, and also represents that highest average catch per trap during the weeks of harvest across those years.

So why the good results? There are a few reasons for this, but one reason we should acknowledge before getting into any of the others is that growers are better armed with an understanding of how to manage SWD than they were several years ago. As a result, growers are on their A-game during the SWD risk period, and that counts for a lot. Growers are prioritizing pushing through harvest as quickly as possible to beat the steady climb of the pest and keeping tight intervals of excellent materials in the orchard.

However, there is some good fortune involved for growers in west central Michigan that we need to acknowledge because it comes with some valuable lessons on the future of tart cherry farming in the region. Growers in west central Michigan are extremely fortunate to be harvesting tart cherries early, from the first half of July into the first couple of days of August. SWD steadily climbs after it enters the exponential phase of its population cycle regardless of how good a cherry grower is. The beginning of the exponential buildup typically begins in late July, and once this process begins it is exceptionally difficult to keep the pest in check. At this point, west central growers know from experience that sites harvested in the first three weeks of July tend to be very easy to manage for SWD while sites that are harvested in the last week of July and any site harvested in early August can be extremely tough.

Consider this: SWD has not been detected in 2017, 2018 or 2019 in any commercially managed sweet or tart cherry fruit assay conducted in west central Michigan by Michigan State University Extension before July 15. That simple statement says a lot about where we are headed as a region.

Growers in west central Michigan are realizing this means farms with diversities of early and late sites can be catered to take advantage of this fact. Late sites are being consciously avoided whenever possible for new plantings by tart cherry farmers throughout the region and are instead being selected for apple, sweet cherry or peach plantings. While a tough economic situation currently means few trees will go into the ground in the next couple of years, planting new tart cherry orchards only on early sites in the region is a key part to many farmer’s game plan for tart cherry farming going forward, as is accelerating the pace of harvest to the highest possible rate to shorten the season.

Harvesting fruit as early in July as possible is one of the most reliable factors to a successful season. Adjusting to this will take some time and is not possible for all growers in the region, but will be helpful to any grower with the land options to move in this direction. West central Michigan is a region filled with microclimates, so many growers in the area have a diversity of options in their acreage and thus have options on the table for future plantings. Growers are also planting significant acreage of dark sweet cherry to complement their tart cherry acreage. The early harvest of sweet cherries means growers can manage SWD in this crop extremely effectively in most seasons with fewer sprays than must be used on tart cherry. SWD often doesn’t start showing up consistently in the local trap line until well after sweet cherry fruits are susceptible, allowing for significant savings in sprays as fruits color.

This brings us to the discussion of traps, specifically how we should be using them as an industry. The biggest role these traps have is showing us when the first sprays need to start each season because the date that SWD begins to show up consistently in a regional trap line can vary quite a bit from year to year. This is particularly valuable for the sweet cherry crop and for farmers who have tart cherry orchards that are harvested in the first half of July, as we frequently see growers skip SWD sprays on susceptible fruit (straw colored or later) in the early, mid and even late part of June if SWD are not showing up consistently in area traps. As a result, at this time of year the trapping network provides valuable information that can save us money.

That changes once the majority of traps start catching consistently, and it definitely changes once they start detecting an exponential climb in the pest. The traps do not have a role in assessing relative risk of a farm once they start capturing SWD consistently, nor should they be used to compare success or failure of one farm versus another. Fruit infestation doesn’t necessarily follow the site with the highest trap numbers—in fact, one site that we followed in 2017 that had infested fruit actually had the lowest cumulative catch of SWD relative to 12 other sites in the region in the two weeks prior to the infestation. Conversely, only one of the three highest sites in cumulative population that we have followed since 2017 has ever had infestation documented, and in this case only one time when a material was stretched 11 days in 2017.

Furthermore, we don’t see a consistent effect on the number of SWD that show up in traps in the days following sprays of even the best products, further highlighting the separation between management style and trap number. Cherry growers are all using roughly the same materials at very similar intervals, there isn’t much deviation between farms anymore. It’s tempting to credit a unique strategy when looking at trap numbers from week to week, but the data point more to the fact that some sites just tend to capture more SWD than others year after year regardless of management style. There are a lot of great cherry growers out there—some folks just have a few blocks that pull a lot flies each week.

The bottom line as we look to 2020 and beyond: Use the SWD network traps to determine the start date for the management program, prioritize early harvest to the greatest possible extent, stay as close to seven-day intervals of excellent materials as you can once the majority of the traps in the line start catching, and target the earliest sites on your farm for future tart cherry plantings. You should also try to keep grass in the orchard as short as possible, and trees should be pruned regularly to improve air flow—both of these practices have been shown by research from the Northwest Michigan Horticulture Research Center to reduce probability of infestation. West central Michigan is a still a great place to grow cherries due to the early harvest season, and growers have the tools they need to get through harvest successfully going forward so long as they are deployed correctly.