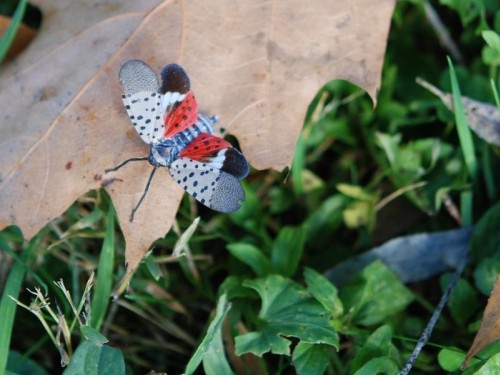 Spotted lanternflies suck sap from fruit crops and trees, which can weaken them and contribute to their death. Native to China, the insect was first found in the United States in 2014 in Pennsylvania. (Lawrence Barringer, Pennsylvania Department of Agriculture, Bugwood.org)

COLUMBUS, Ohio — An invasive pest that was initially contained within Pennsylvania has spread to Delaware and Virginia, and insect experts worry the next stop will be Ohio.

Spotted lanternflies suck sap from fruit crops and trees, which can weaken them and contribute to their death. Native to China, the insect was first found in the United States in 2014 in Pennsylvania.

At this time, spotted lanternflies are still relatively far from the Ohio border. They have been found in the southeastern part of Pennsylvania, near Philadelphia. However, they can be spread long distances by people who move infested material or items containing egg masses.

“The natural spread would take a long time, but it would be very easy to be moved through firewood or trees that are being relocated,” said Amy Stone, an educator with Ohio State University Extension. OSU Extension is the outreach arm of the College of Food, Agricultural, and Environmental Sciences at The Ohio State University.

If it arrives in Ohio, the spotted lanternfly has the potential to do serious damage to the grape, apple, hops and logging industries, Stone said.

The lanternfly’s preferred meal is from the bark of Ailanthus or tree of heaven, which is typically not intentionally planted but instead grows on abandoned property and along rivers and highways.

Compared to the spotted wing drosophila or the brown marmorated stink bug, which seize on fruit and vegetable crops, the spotted lanternfly has a more limited palate so it likely would not do as much damage, said Celeste Welty an OSU Extension entomologist.

“Everybody’s fear is any new invasive pest will be like those two. But it seems to me, it’s not as much of a threat,” Welty said.

And unlike the spotted wing drosophila and the brown marmorated stink bug, the lanternfly is easy to spot because the adult bug is about 1 inch long and, with its wings extended, about 2 inches wide, Welty said.

For now, all that can be done to stem the spread of lanterflies is to stay watchful for their presence and any damage they may inflict. On trees, they zero in on the bark, particularly at the base of the tree. Lanternflies can cause a plant to ooze or weep and have a fermented odor. They can also cause sooty mold or a buildup of sticky fluid on plants as well as on the ground beneath infested plants.

An app developed by the CFAES School of Environment and Natural Resources allows users to report invasive species if they suspect that they have come across them. The app, which is called the Great Lakes Early Detection Network, features details about invasive species that people should be on the lookout for.

If someone sees a lanternfly, he or she should contact the Ohio Department of Agriculture at 614-728-6201.