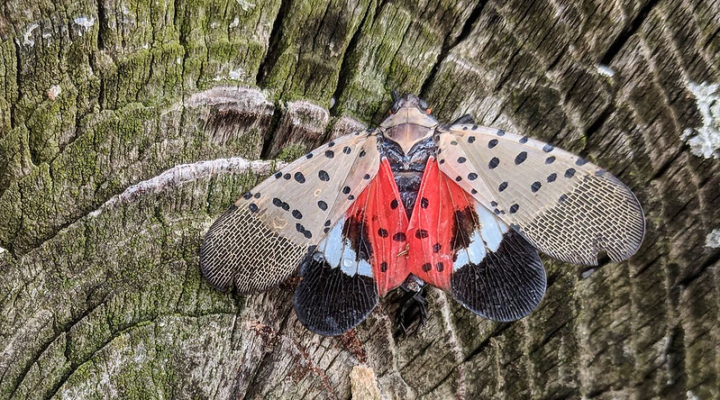 With no natural enemies in the U.S., spotted lanternflies, Lycorma delicatula, can cause extensive damage to vines, crops and trees. Virginia’s Spotted Lanternfly Quarantine currently includes the city of Winchester and the counties of Clarke, Warren and Frederick. (photo by Caitlyn Johnstone/Chesapeake Bay Program)

With no natural enemies in the U.S., spotted lanternflies, Lycorma delicatula, can cause extensive damage to vines, crops and trees. Virginia’s Spotted Lanternfly Quarantine currently includes the city of Winchester and the counties of Clarke, Warren and Frederick.

“Together, pesticide treatments and the Spotted Lanternfly Quarantine have slowed the spread of this invasive pest,” said David Gianino, program manager for the Virginia Department of Agriculture and Consumer Services Office of Plant Industry Services. “However, surveys conducted by VDACS indicate that spotted lanternfly populations have now become established in other cities and counties.”

“Beyond direct damage to crops, the lanternfly also poses a risk to any business reliant on import and export of goods between states, as other states consider quarantines to prevent the spread of the invasive species,” said Ben Rowe, Virginia Farm Bureau Federation district field services director.

The spotted lanternfly has been traced back to a cargo load of landscaping stone shipped to Pennsylvania from China in 2014. The insects have been prolific in Frederick County since 2018, said Virginia Cooperative Extension agent Mark Sutphin.

While the pest feeds on over 100 plant species, wine grapes are the crop of greatest concern in Virginia.

“The vines get stressed, which reduces hardiness going into the winter, and can lead to complete death,” he said.

Quarantines and insecticides are somewhat effective.

“But there’s not a silver bullet out there unfortunately,” Sutphin continued. “The goal is to give businesses and growers as much time as possible to allow science to catch up, and maybe a biological control will emerge.”

VDACS officials say regulations are necessary to reduce further spread. Regulated items must be free of spotted lanternflies or egg masses prior to transport outside a quarantine area. A permit allowing businesses to conduct self-inspections of regulated items can be obtained through VDACS after completing online training.

Visit bit.ly/3zES5ke for information on the Spotted Lanternfly Quarantine, including permitting instructions and a list of regulated items.