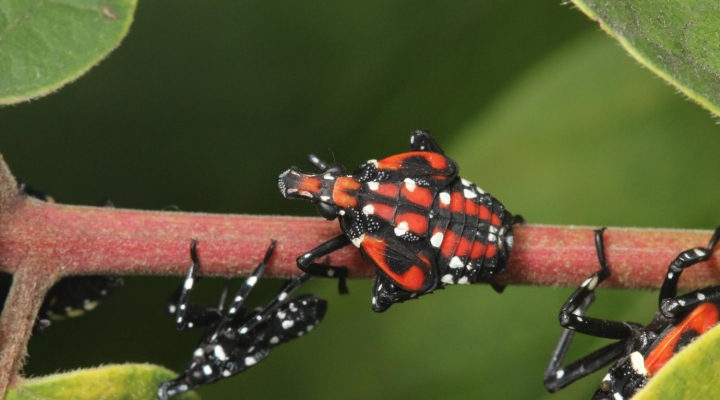 With endless information available 24/7 on the internet and social media, it can be hard to separate fact from fiction. That certainly is true in the case of the spotted lanternfly. This destructive pest has bewildered and frustrated many people since it first appeared in North America in Berks County in 2014.  It’s a new insect to the U.S., and like anything new, people are seeking any bit of information they can get. (Credit: Joe Keller / Penn State. Creative Commons)

UNIVERSITY PARK, Pa. — With endless information available 24/7 on the internet and social media, it can be hard to separate fact from fiction.

That certainly is true in the case of the spotted lanternfly. This destructive pest has bewildered and frustrated many people since it first appeared in North America in Berks County in 2014.  It’s a new insect to the U.S., and like anything new, people are seeking any bit of information they can get.

But some of that information isn’t accurate, noted Julie Urban, associate research professor of entomology in Penn State’s College of Agricultural Sciences.

“The early lack of understanding about the spotted lanternfly, coupled with frustration, has led to the sharing of erroneous information, especially on social media,” Urban said. “Sometimes people repeat data that once was accurate but has changed based on more recent research. We want people to use recent information from credible sources.”

While ongoing research conducted by Urban and other scientists is unraveling the spotted lanternfly’s mysteries, some fallacies about the pest persist, including the following:

— Myth: The spotted lanternfly kills all plants and trees. Not true, says Kelli Hoover, professor of entomology, who is among the Penn State scientists studying the pest. She said that while spotted lanternflies will feed on more than 100 species of trees and other plants, recent discoveries suggest they rarely kill them.

There are two exceptions: cultivated grapes, which is a grave concern to vineyard operators in Pennsylvania and beyond; and Ailanthus altissima, known as tree of heaven, which is a noxious and invasive weed tree.

However, Hoover cautioned that when large numbers of spotted lanternflies feed on one tree — regardless of the species — it must affect that tree, and her team is studying those effects.

“A stressed tree may be more susceptible to other stressors such as disease, other insect pests or drought,” she said, adding that saplings are more likely to experience significant stress from spotted lanternfly feeding than mature, established trees.

Although spotted lanternfly feeding doesn’t impact most trees and plants as once thought, that doesn’t mean that scientists studying the planthopper are easing off the brakes in finding solutions. It’s quite the opposite, noted Urban.

“The spotted lanternfly’s propensity for hitchhiking has led to state quarantines that require any shipment and movement of goods, as well as conveyances, to be free of any life stage of the spotted lanternfly,” she said. “As such, economic impacts are being felt by a wide range of industries. We must keep this pest from spreading.”

— Myth: The spotted lanternfly is no longer present in certain areas. Some residents living in regions with prior sizeable lanternfly populations have reported seeing fewer spotted lanternflies in 2021. These observations have led some to speculate that the insect interloper might be gone for good. But Emelie Swackhamer, horticulture extension educator, says that is wishful thinking.

She explained that several factors are influencing spotted lanternfly populations, including the impact of natural predators and parasites, people’s efforts to reduce populations, and the natural ebb and flow of insect populations. However, the most plausible reason is food.

“We believe they leave an area when they have depleted their food source and need to find a better one,” Swackhamer said. “This behavior might explain why in areas where populations were high, there are not many the following year. After trees recover, high populations might come back.”

— Myth: Homemade sprays are safe and effective. Folks may be tempted to use home remedies that include household items such as dish soap, glass cleaner, vinegar, salt, garlic and chili/cayenne peppers.

Some of these suggestions, such as dish soap, do not seem harmful because people use them daily. However, even dish soap can hurt beneficial insects and other animals, as well as plants and trees, and should not be used.

For residents who choose chemical control, she recommends using a registered insecticide, researching the pros and cons, and hiring professionals. “Every situation is different; no one method will work for everyone,” she said. “Remember, all insecticides present safety risks, so people must use caution with these products.”

“Spotted lanternflies have piercing-sucking mouthparts that function like a tiny straw, but these mouthparts are not capable of penetrating human or animal skin,” she said.

While social media posts suggest that the insect might be toxic to pets, there currently is no evidence to support those claims, she added. “Some tests have been done, and to our knowledge, spotted lanternflies do not harbor cantharidin, a harmful substance that is present in some other insects,” Urban said.

However, she emphasized, more research is needed. “In the meantime, it’s important to observe pets closely to keep them from eating any insects, including spotted lanternflies,” Urban said. “Aside from toxicity concerns, insects with tough wings and exoskeletons can be difficult for any animal to digest in large quantities.”

While the spotted lanternfly does not cause damage to buildings or property, it does leave behind sugary excrement called honeydew, which promotes the growth of sooty mold. This combination creates a mess, attracts other insects and renders outdoor areas unusable.

For the latest science-based information about the spotted lanternfly, visit the Penn State Extension website at https://extension.psu.edu/spotted-lanternfly or call 888-4BAD-FLY (888-422-3359).

A roadmap to greener pastures