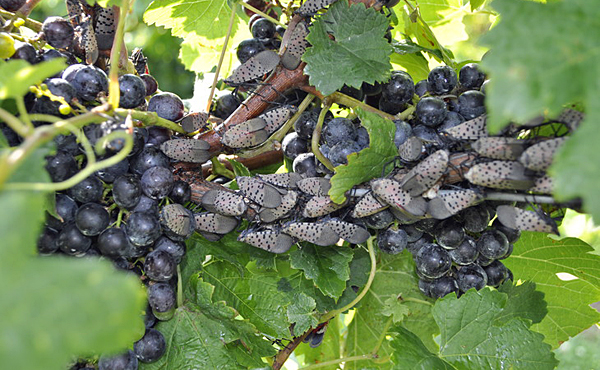 UNIVERSITY PARK, Pa. — The spotted lanternfly is not a strong or frequent flyer, weaknesses that may hinder its ability to travel long distances by air, according to researchers in Penn State’s College of Agricultural Sciences.

Those were among the findings of a study on flight behaviors of the invasive planthopper from Asia, first discovered in the United States in Berks County in 2014.

Reports of several massive flight dispersals of the insect — tens of thousands at a time — in late summer of 2017 prompted a closer look into the pest’s flight patterns by scientists in Penn State’s Department of Entomology.

“Even before these flight episodes, it became apparent to us that we needed to learn the ‘how and why’ of spotted lanternfly flight,” said Thomas Baker, distinguished professor of entomology and chemical ecology, whose research team began the wind-oriented, flight dispersal research in 2017, followed by a second phase in 2018. The findings of the 2017 experiments were published recently in the Journal of Insect Behavior.

Since 2014, the pest has caused hardships for southeastern Pennsylvanians by swarming public areas and feasting on the sap of crop plants such as grape vines and fruit trees, where they excrete a sticky “honeydew” that results in a harmful black sooty mold that can impair plant growth.

More alarmingly, in 2018 several vineyards reported large amounts of vine mortality and failure to set fruit, apparently due to the sheer amount of feeding and sap loss from dense populations of the pest.

Despite a 14-county quarantine imposed by the Pennsylvania Department of Agriculture, populations of the insect have been found in New Jersey, Virginia and Delaware, and individual specimens have turned up in other states, possibly by hitchhiking on vehicles or shipped goods.

“We wanted to discover if there was any preferred directionality to these flights related to wind, visual landmarks or anything else,” he said. “We believed this information would give state and federal workers insight into where an infestation might be expected to spread in the future.”

In September and October of 2017 and 2018, Baker’s group set up experimental sites at a fruit farm near Oley, Pennsylvania, and at an additional site in 2018 at Dorney Park in Allentown. Researchers knew that both locations had spotted lanternfly infestations. They made recordings of individual lanternflies’ flight paths during mass flight dispersals, documenting ground speed and air speed, as well as duration, distance and trajectory of flights, among other factors.

The researchers found that adult spotted lanternflies, both male and female, will crawl to the top of the nearest vertical surface and launch themselves into the wind to create level or gradually descending straight-line flight paths, usually 10-30 feet high and averaging 75 feet in length before landing.

Baker noted that the average flight lasts only 11.5 seconds because “the lanternflies cannot generate much lift, and on the vast majority of days, they are constrained to fly at or below the altitude they launch themselves from.”

However, an exception occurs on very hot days when rising, buoyant air increases the insects’ amount of lift, carrying them hundreds of feet high at times. On the few days when this occurred during the two-year study, Baker’s team followed individual, high-flying adults and observed them being carried downwind in slowly descending flights of between 325 and 650 feet.

“These occasional longer-distance flights can result in serious sudden arrivals of lanternflies in orchards and vineyards where feeding and damage can occur,” Baker said.

He pointed out that the group’s experiments at Dorney Park showed that during flight, the lanternflies orient strongly to anything they can see nearby, including light poles, garbage cans and tree trunks, which they gravitate toward. After landing, the pests immediately begin trying to feed, even on nonedible items, which suggests to the researchers that the lanternflies are taking to the skies in search of food.

“We believe that these adults had not attained sufficient nutrition from the trees they had been feeding on before embarking on flights,” Baker said. “In short, repeated feeding by a population in the same location for long periods seemed to have reduced the food quantity or quality, and they needed to move to find their next meal to complete their reproductive development.”

Baker believes that the lanternflies’ strong visual response to vertical silhouettes, coupled with their tendency to stay visible on these surfaces for a long time — up to several hours at a time — may provide an effective way to document spotted lanternfly populations and possibly to predict their next move.

“Telephone poles along a roadway, for example, could be used as ready-made monitoring stations for field scouts investigating infestations,” he said. “This technique could aid in determining the extent of the spread of spotted lanternfly populations during late summer and fall.”

For more information about how to identify and control spotted lanternfly, how to report an infestation and how to comply with quarantine regulations, visit the Penn State Extension website at https://extension.psu.edu/spotted-lanternfly.

Andrew Myrick, assistant research professor of entomology, Penn State, was a co-author on the study.

Every Spotted Lanternfly egg mass not destroyed is 50 more next spring
October 31, 2021