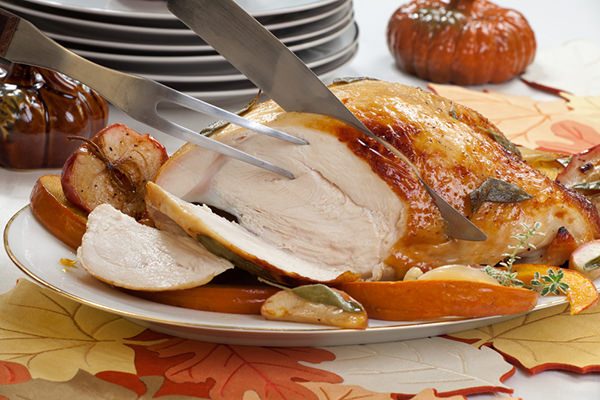 Higher food prices have received considerable attention from the media in the last couple of months, and turkey prices are no exception. (Kurman Communications, Inc. via Flickr/Creative Commons)

FARGO, N.D. — When the calendar turns to November, many people’s thoughts turn to Thanksgiving family get-together planning. At the forefront is a bountiful holiday meal which may include turkey. Included are abundant amounts of a wide variety of side dishes where many ingredients originate from a very productive and diverse U.S. agriculture.

Higher food prices have received considerable attention from the media in the last couple of months, and turkey prices are no exception.

Prices are record high with USDA predicting an average annual 2021 price at $1.21 per pound. The previous record high annual price was set in 2016 at $1.17 per pound.

Higher prices are the result of turkey production declining from 5.74 billion pounds last year to 5.63 billion pounds in 2021 -a 2.3% decline. USDA estimates that 214 million turkeys will be raised in the U.S. this year compared to 224 million last year.

Most turkey hens are sold as frozen whole birds. Toms are mostly destined for further processing and made into many consumer products such as breasts, legs, bacon, deli meats and ground turkey that are consumed the year around. Many of these products are sold in the foodservice sector which was severely impacted by the COVID-19 pandemic in 2020.

Stay at home and social distancing orders meant that foodservice meat demand declined significantly with restaurants and schools closing, and sporting events, concerts, etc. canceled. That is evident in turkey breast prices which were below average in 2020. However, as vaccinations became available and the food sector began reopening in 2021, demand for breast meat increased and prices soared.

Turkey breast prices increased from $1.75 per pound in April to $3.53 per pound now.

The U.S. is also the leading producer of beef and chicken, and second only to China in pork production.

Likewise, the U.S. is the leading exporter of high-quality beef and pork and is second only behind Brazil in chicken exports.

So, the U.S. meat industry is very important to the U.S. economy and livestock producers. Consumers also benefit from an ample, year-round supply of a myriad of meat product choices, especially at Thanksgiving.

Minnesota is the leading turkey-producing state with 40.5 million birds produced in 2020. North Carolina ranked second with 29 million, and Arkansas was a close third with 27 million. South Dakota ranks 12th at 4.5 million. USDA does not publish North Dakota turkey production data, but according to the North Dakota Turkey Federation about one million birds are produced on nine turkey farms in the state.

How much turkey do we gobble up at Thanksgiving? According to the National Turkey Federation, about 46 million turkeys are on Thanksgiving tables, 22 million are eaten at Christmas, and 19 million are consumed at Easter. U.S. per capita consumption of turkey has averaged about 16 pounds for the last 10 years with USDA estimating 15.5 pounds consumed per person in 2021.

Even though wholesale turkey prices are higher, consumers may find bargains when shopping for Thanksgiving turkeys. Some food chain stores contract turkeys several months in advance. Retail food stores may feature turkeys as “loss leaders” at below cost to lure customers into the store to purchase higher-margin items that complete the Thanksgiving meal. Sometimes even local price wars emerge.

Even though the COVID-19 pandemic continues to disrupt our everyday lives, and food prices are higher; we still have a lot to be thankful for. U.S. consumers enjoy the safest, largest quantity and most diverse product line of meat in the world. Happy Thanksgiving to all of you.