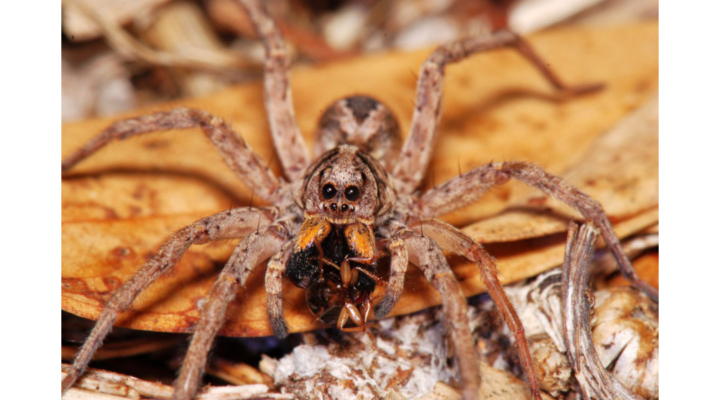 COLUMBIA City, Ind. — Mention spiders to people and many get the heebie-jeebies. Are they good? Are they bad? Are some good, and some bad? What role do they play in our world, other than evoking panic in many people?

In the nursery rhyme, “Little Miss Muffet,” a spider came along and frightened a child away from her cottage cheese (“curds and whey”). However, in the book and subsequent movie, “Charlotte’s Web,” we became endeared to the spider, Charlotte, for lauding the attributes of Wilbur the pig, former runt of the litter, in her web. In comic books and in modern movies, Marvel has portrayed the friendly neighbourhood Spider-man, who was bitten by a spider, as a powerful and affable hero.

Insects and spiders are arthropods – invertebrates (having an exoskeleton) with jointed appendages. However, spiders are not insects; they are arachnids, a group that also includes scorpions, ticks, and mites. Spiders have 8 legs, up to 8 eyes, and two main body segments. They produce silk for egg sacs or webs, and the young spiderlings resemble the adults.

Spiderlings release long silken strands, called gossamer, which they use like a parachute to ride wind to other areas. This practice is called “ballooning”. Gossamer may also refer to a film of floating cobweb.

The truth is, most spiders are good, and beneficial.

Spiders are beneficial primarily because they prey on and eat insects. A few of our common beneficial spiders include wolf spiders, grass spiders, American house spider, fishing spiders, Black-and-Yellow Garden Spider, various orb weavers, jumping spiders, and daddy long-legs. However, the daddy long-legs is technically not a spider, but in an order of arthropods known as “harvestmen”.

Even though many spiders are beneficial, we typically don’t like to share our living spaces with them. Purdue experts Timothy Gibb and Gary Bennett authored Purdue Extension publication E-72-W, “Spiders,” in which they offer suggestions for spider control in and around homes, plus information about two spiders of concern I’ll cover shortly.

“Sanitation is the most practical method of spider control,” they said. “Clean away all webbing with a vacuum cleaner so that eggs and spiders are picked up and destroyed.” They add that ordinary housecleaning with a cloth, dust mop, or broom is not effective. Keep premises free of unneeded, undisturbed clothing, papers, and other litter. Many spiders may be excluded from the home by caulking or otherwise eliminating cracks and crevices around the foundation of the house and around windows and doors.

“Chemical control using a long-lasting residual spray containing a pyrethroid insecticide is effective when applied around the outside of the home and in undisturbed locations in the house where spiders are likely to be found,” they said. “Check labels of specific insecticide products for active ingredient listings.” Aerosols, mists, or fogs containing synergized pyrethrins or related synthetic pyrethroids can also be used for control indoors where residual sprays are not desirable, they said.

“Outside areas usually needing attention are porches, garages, and eaves of the roof,” they said. “Spiders may also be found in crawl spaces, basements, and unexcavated areas beneath the house.” All areas where spiders are found should be treated.

There are two spiders in Indiana we consider bad because of potential human health effects. They are the Brown Recluse, Loxosceles reclusa, and the Black Widow, Latrodectus mactans.

The brown recluse lives up to its name. It lives like a recluse in undisturbed locations, like barns, sheds, garages, and home closets that do not get used very often. “Favorite hiding places seem to be the arms or legs of garments left hanging undisturbed for some time,” they said. It is light tan to reddish brown, with a body about 3/8 inch-long, 3/16 inch-wide, and 6 eyes. The outstretched legs are about the size of a half-dollar. The distinguishing marking on a brown recluse is a fiddle-shaped marking on the front half of the back. It’s sometimes called the “fiddle-back spider”.

The authors said of the brown recluse, “The bite of this venomous spider can cause serious ef­fects. It is especially dangerous to children, the elderly, and to those in poor physical condition. Contrary to some reports, fatalities from bites of the brown recluse are very rare. Reac­tion to the bite varies considerably and depends upon the amount of venom injected and individual sensitivity to it.”

Regarding symptoms, they said, “Extreme pain may follow almost immediately after the bite, or the bite may not be noticed for an hour or more. The visible sign of recluse poisoning is a small white blister at the site of the bite. The affected area enlarges, becomes inflamed, and the tissue is hard to the touch. Eventually the affected tissue is killed and peels away, leaving a sunken, ulcerating sore up to the size of a silver dollar.”

The female black widow is a jet-black spider with an hourglass-shaped red to yellow marking on its underbelly. It’s outstretched legs about cover a penny.

The authors said, “The poison of the black widow affects the nervous system of humans. Persons bitten may experience a variety of symp­toms, such as dizziness, blurred vision, breathing difficulty, nausea and severe pain around the wound. In such instances, a physician should be contacted immediately.”

They said the black widow also lives in undisturbed locations, such as under rocks and boards, and in and around old buildings. She is active on her irregular web during the day.

For more detailed information, access Gibb and Bennett’s publication on spiders at: www.edustore.purdue.edu.