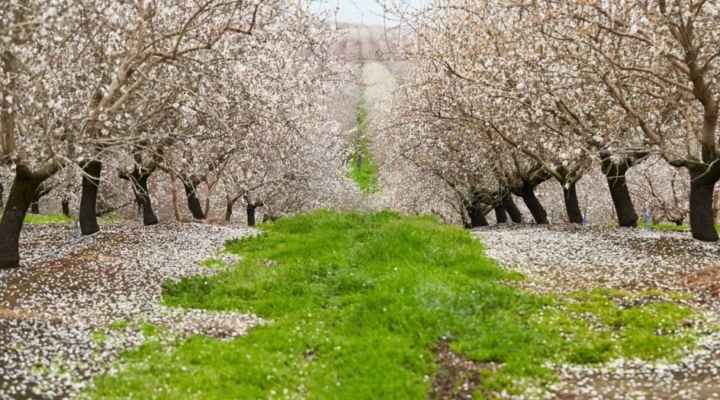 To control spider mites, many almond farmers have taken to routinely spraying their trees with a miticide in May, however, research by UC Integrated Pest Management advisor Kris Tollerup shows that the pesticide application could cause more harm than good. (Almond Board of California)

DAVIS, Calif. — To control spider mites, many almond farmers have taken to routinely spraying their trees with a miticide in May, however, research by UC Integrated Pest Management advisor Kris Tollerup shows that the pesticide application could cause more harm than good.

“The preventative sprays do suppress spider mite populations, but there’s no beneficial effect because the mites show up very late in the season and the population density remains well below an economic level,” Tollerup said. “A natural enemy, six-spotted thrips, will likely show up and suppress the mite population before any damage occurs.”

Tollerup recommends almond farmers monitor their orchards for spider mites and six-spotted thrips to determine whether treatment is necessary.

During the 2017 growing season, about 517,000 acres of almonds in California received a preventative miticide application in May; 93% were treated with the insecticide abamectin.

“This strategy runs counter to sustainable integrated pest management practices,” Tollerup said. “The sprays adversely impacts spider mite natural enemies and are based on the calendar, not on the monitoring and economic thresholds that the UC Statewide IPM program has determined help reduce pesticide applications.”

The heavy reliance on abamectin has also caused some spider mites in the mid-San Joaquin Valley to become 16 times more resistant to the miticide than susceptible populations.

Tollerup worked with the Almond Board of California and a large grower in Kern County to compare the effectiveness of the preventative miticide spray with plots that were simply monitored for pests and natural enemies.

“Tollerup and other UCCE advisors have correctly identified the problem and spoken out both in public and private about not treating unless economic thresholds have been met,” said a pest control adviser working in Kern County. “Because of Tollerup’s role, we have been able to collaborate with farmers to hold off on spring treatments at many ranches and only treat when warranted, which has essentially removed a spray treatment on a vast number of acres.”

Surveys conducted after the trial results were released showed that 80,000 acres of almonds were not treated with miticide sprays in May 2018 and May 2019. The change in strategy resulted in a savings to farmers of about $2.2 million in miticide and application costs.

Moreover, Tollerup calculated a subsequent reduction of 880,000 pounds of carbon dioxide emissions due to reduced use of diesel tractors and motor-driven application equipment associated with the miticide spray.

Include farmers in coronavirus relief program