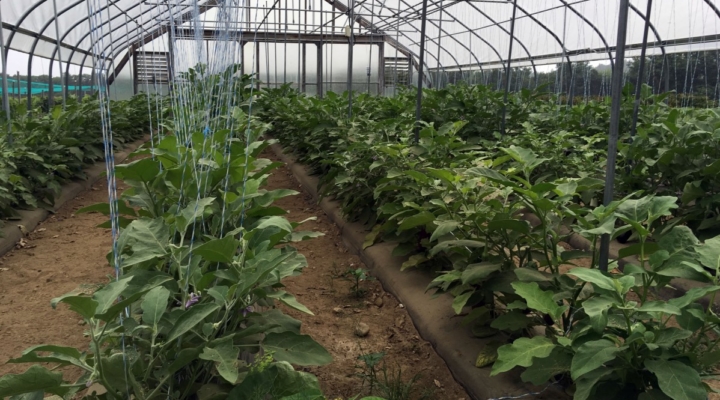 The primary goal of the three-year study at the experiment station’s Woodman Horticultural Research Farm is to compare yields of eggplant varieties in high tunnel production conditions. (Credit: Becky Sideman/UNH)

DURHAM, N.H. — Researchers with the New Hampshire Agricultural Experiment Station at the University of New Hampshire have found that eggplant varieties developed specifically for growing in greenhouses and high tunnels produced a prolific amount of fruit, offering Granite State growers another option for their summer vegetable production.

“A comprehensive survey of high tunnel producers that we conducted in 2016 indicated that a surprisingly high number of producers were growing eggplant in tunnels. This number increased further in a 2019 survey. While some cultivars are marketed as being suitable for high tunnel production, there have been no comprehensive studies available to guide selection of eggplant cultivars,” said experiment station researcher Becky Sideman, extension professor of sustainable horticulture production.

According to the USDA’s Census of Agriculture, 92 Granite State farms were growing eggplant to sell fresh to consumers in 2017, an increase from 55 farms in 2012.

Sideman and Leah Ford, undergraduate research assistant, evaluated elongated types of eggplant including several parthenocarpic varieties (ones that set fruit without pollination) recently developed specificallyfor greenhouse and tunnel production. The primary goal of the three-year study at the experiment station’s Woodman Horticultural Research Farm is to compare yields of eggplant varieties in high tunnel production conditions. In addition, they are investigating whether pruning would affect yields compared to no pruning and to compare quality of different varieties in post-harvest storage.

In the first year, researchers evaluated seven varieties of eggplants: Angela, Aretussa, Jaylo, Michal, Nadia, Traviata, and White Star. They found only slight differences in total marketable yield between varieties, but varieties differed in percentage of marketable fruit. “We were impressed by the early, prolific, and prolonged fruit production of high tunnel eggplant varieties. Cumulative yields exceeded six pounds perplant in some cases. We suspect that with earlier planting, this could likely be increased,” Sideman said.

Researchers found aphids and spider mites presented challenges to growing eggplants in high tunnels. “Throughout the season, all varieties showed a good continuity of production, aside from a dip in earlySeptember. This may have been at least in part due to a spider mite infestation in August,” Sideman said. “Growers should monitor frequently for these pests and have a plan in place to manage them if they are detected.”

Regarding pruning, researchers found while the typical field strategy of corralling plants without pruning produced acceptable yields, pruning plants to two to four leaders increased yields. They caution that additional research is needed to confirm this result in additional years and/or locations, and more carefully assess the labor and management costs of these pruning systems.

Now in its second year, the experiment has expanded to include eight varieties, and portions of the experiment are being repeated by collaborators Olivia Saunders and Heather Bryant, both with UNH Cooperative Extension in Carroll and Grafton Counties, respectively.

According to Sideman, vegetable and berry growers in New Hampshire face several unique challenges, including a humid climate that favors disease and insect pressures, a short growing season and variable weather patterns, high land values and labor costs. Despite these challenges, the opportunities for local vegetable and berry production are vast. The strong relationship between producer and consumer encourages growers to market innovative crops and products that are unique to their farm or to the region, thereby differentiating themselves from other farms and from supermarkets.

“Crop varieties developed in other climates may or may not be adapted to the short growing season, cold winter temperatures, specific soil types, or prevalent pests of New Hampshire. As a result, varieties must be carefully evaluated for performance in this region. Use of the most effective growing practices for our region, including new varieties, new crops, and season extension strategies, can increase farm profitability through diversification and improved yields and crop quality. For this reason, we focus our integrated research and extension effort on high-value specialty crop production systems and methods of extending the growing season in New Hampshire,” she said.

This material is based upon work supported by the NH Agricultural Experiment Station, through joint funding of the National Institute of Food and Agriculture, U.S. Department of Agriculture, under awardnumbers 1006928 and 1017760, and the state of New Hampshire. This work also was supported by the NH Vegetable & Berry Growers’ Association and UNH Cooperative Extension. The researchers are grateful to experiment station farm and greenhouse staff Evan Ford, Kyle Quigley, David Goudreault, and Luke Hydock for their technical support and expertise. For more information on this research, visithttps://extension.unh.edu/resources/files/Resource007621_Rep11102.pdf. This project is one of many that will be featured at the farm on Durham Farm Day Aug. 17.