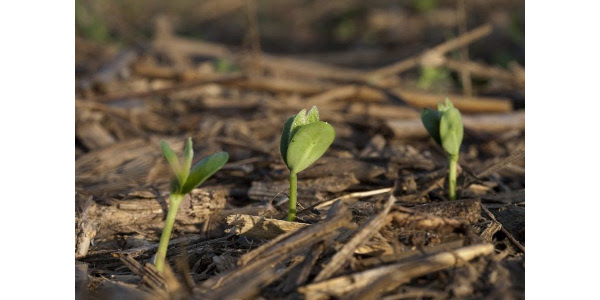 Soybean acreage left to plant in the 18 states reported by NASS in the weekly Crop Progress report sat at 57.8 million acres as of May 26. Due to rainy weather over large areas of the Corn Belt last week, the likelihood of extensive planting seems limited in the upcoming report. (Courtesy of United Soybean Board)

URBANA, Ill. — Soybean prices rallied over the last two weeks on planting issues across large swathes of the Corn Belt. Based on current consumption pace, soybean use this marketing year looks to end up at or below the USDA’s projection of 4.004 billion bushels, according to University of Illinois agricultural economist Todd Hubbs.

“Given that two to three weeks remain until prevented planting dates on soybeans occur over most of the Corn Belt, the possibility of planting more soybean acres than needed under a weaker demand scenario looks inevitable,” Hubbs says.

“As we enter the final quarter of the 2018-19 marketing year, the pace of consumption appears to be at or below the current USDA projection,” he adds.

Soybean crush remains on pace to hit the USDA forecast of 2.1 billion bushels. The forecast is 2.2% larger than the crush totals during the previous marketing year. Estimates for soybean crush during the first eight months of the current year exceeded that of last year by 3.4%. The year-over-year changes in crush slowed during the third quarter of the marketing year. Crush during the most recent three months reported by USDA (January-March) exceeded that of a year ago by .01%, down from an average of 6.5% during the first four months.

“To reach the USDA projection, soybean crush totals during the last four months of the marketing year need to hit the same levels as last year. In total, approximately 690 million bushels of soybean crush from May through August will reach the 2.1 billion forecast,” Hubbs explains.

“Continued deterioration in trade negotiations with China led to reports of no buying of U.S. soybeans moving forward. However, no indication of withdrawing the 257 million bushels of outstanding sales currently on the books has been forthcoming,” Hubbs says. “A resumption of trade hostility with Mexico does not help the export situation considering Mexico is the second largest soybean export market this marketing year.”

Planting concerns hang over the 2019 soybean production season. Planting has proceeded at a pace that sits well behind the previous five-year average.

“Due to issues with corn planting and uncertainty about Market Facilitation Payments, an expectation of soybean acreage exceeding the intentions reported in the USDA’s March Prospective Plantings report seems prudent,” Hubbs says. “This acreage scenario is in stark contrast with the situation associated with corn acreage. Corn acreage appears set for substantial prevented planting or acreage switching as wet weather stretches into June.

“Acreage switching into soybeans will not be on an acre-for-acre basis from other crops not planted, but the potential for adding more than 3 million acres is high. Additional soybean acreage is not needed under current consumption expectations and brings the strength of the recent soybean price rally into question,” he adds.

Soybean acreage left to plant in the 18 states reported by NASS in the weekly Crop Progress report sat at 57.8 million acres as of May 26. Due to rainy weather over large areas of the Corn Belt last week, the likelihood of extensive planting seems limited in the upcoming report. In particular, major soybean-producing states contain substantial acreage left to plant with Illinois (9 million acres), Iowa (6.4 million acres), and Indiana (5 million acres) all receiving rain from the recent weather pattern. Weather forecasts indicate a return to normal levels of precipitation over the next few weeks, which may get soybean acres planted promptly over many areas. While the potential for prevented planting acres exists for soybeans, the prevent plant date still has 10-20 days remaining over most of the Corn Belt.

“For the U.S., quantifiable yield loss occurs as the percentage of the crop planted after May 30 increases. The prospect of yield losses eclipsing the potential impact of acreage increases remains to be determined from planting progress and summer weather,” Hubbs says. “It seems prudent at this point to assume soybean production at or above the 4.15 billion bushels projected by the USDA in the May WASDE report.”

While the prospects for 2019 U.S. soybean production remain uncertain, the recent price rally in the soybean market may provide a marketing opportunity, Hubbs states.

“The combination of a growing ending stocks during the 2018-19 marketing year due to trade issues and growing supply for the following year may require poor summer weather conditions to sustain higher prices,” he concludes.

Discussion and graphs associated with this article available here: https://youtu.be/FTNFdYzW3I0 or https://uofi.box.com/s/4fbpv1825dpsdk30hnkioygaurkqms5c