Soybean acreage should increase further in 2018 because it projects a positive return to labor and management in all nine crop budget regions of North Dakota, averaging $26 per acre. (United Soybean Board via Flickr)

Soybean acreage should increase further in 2018 because it projects a positive return to labor and management in all nine crop budget regions of North Dakota, averaging $26 per acre.

Acreage of corn, the third largest crop in the state, may decline because all major corn growing regions of the state project negative returns to labor and management, ranging from minus $21 to minus $47 per acre. Only the northwest and southwest regions, which have lower costs but higher production risk, show returns approaching breakeven.

Durum wheat projects a positive return in five regions, led by the southwest at $30 per acre and the south-central region at $25 per acre.

Malting barley typically projects a profit but is subject to substantial price risk if the crop only makes feed quality. This year looks much more pessimistic because of lower malt barley prices, Swenson says.

Dry beans, like malting barley, typically show a profit, but projected prices for 2018 make the outlook more challenging. The strongest return to labor and management is projected for the north-central region at $43 per acre, followed by about $20 per acre in the south-central and southeast regions. The east-central and northeast regions show returns of $9 and $2 per acre, respectively, and Red River Valley regions project losses of around $5 to $10 per acre.

Lentils and small chickpeas project positive returns to labor and management, averaging about $45 per acre in the regions for which they are budgeted.

Projected total costs per acre, on average, were about 2 to 5 percent higher than last year’s projections. Interest expense and fuel, fertilizer and some seed prices, such as for spring wheat, flax, durum and canola, were higher. Most seed and chemical prices were relatively flat.

The situation on the revenue side was mixed. Yields have increased noticeably in many instances but prices for several crops are lower.

Swenson cautions that the budgets estimate returns to labor and management with no consideration of price and yield variability, or risk. A perfect “apple-to-apples” comparison of crops is not achieved because different levels of labor and management, and risk, exist.

The budgets are available at http://bit.ly/NDCropBudgets. 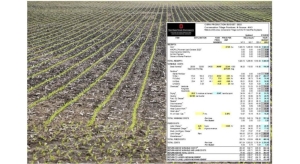 COLUMBUS, Ohio — Higher input costs and higher crop prices have been the theme for the last several months. Higher production costs in 2021 gave way to even higher costs for the 2022 production year. Factors affecting both supply and demand have continued to drive commodity crop prices higher. The result of all of this change […]