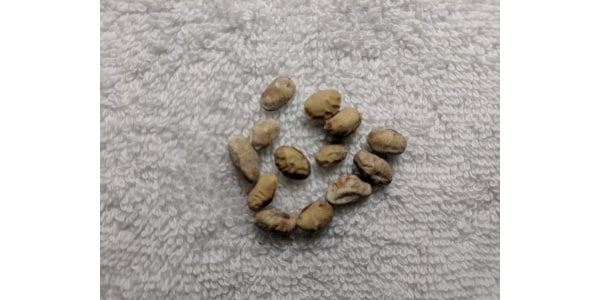 LEXINGTON, Ky. — Although soybean yields have been pretty good this year so far, the seed quality of harvested soybeans has not been great in some fields. Seed diseases have been prevalent in areas that have received a lot of rain since harvest season began. Phomopsis seed decay (usually caused by Diaporthe longicolla, formerly known as Phomopsis longicolla) and purple seed stain (caused by Cercospora kikuchii and Cercospora flagellaris) generally are the two main culprits of poor-quality seed.

Seeds affected by Phomopsis seed decay may appear shriveled, misshapen, and/or chalky white in color (Figure 1).  As the name suggests, seeds affected by purple seed stain will be discolored with purple blotches, or the entire seed may be purple in color (Figure 2).  Purple seed stain may be more prevalent in fields that showed symptoms of Cercospora leaf blight (Figure 3).  Certain varieties in some areas had severe Cercospora leaf blight develop late in the season this year.

The largest economic losses associated with these seed diseases to farmers occur at the grain elevator, when loads of harvested seed may be docked due to “damaged seed.”  Of the two diseases, Phomopsis seed decay generally causes the greatest reduction in seed germination.

The two most common questions that I am receiving about these diseases are:

Why am I having this problem this year?

The primary reason why Phomopsis seed decay and purple seed stain occur in a field has a lot to do with the weather that has occurred since soybeans have been at physiological maturity.  Fields in areas of the state that have received frequent rainfall since soybeans have been mature have been hit the hardest with seed disease problems.  Along with wet weather, the very warm temperatures that the State was experiencing up until recently also helped promote infection by these fungi.  The Phomopsis seed decay pathogen is best able to infect seeds after physiological maturity, and the longer that soybeans sit in the field in wet and warm conditions after they are mature, the greater the likelihood of Phomopsis seed decay problems.

What could I have done to prevent these seed disease issues?

Harvesting soybeans as soon as possible after physiological maturity and at optimal seed moisture is the primary way to avoid problems with Phomopsis seed decay and purple seed stain; however, when rainy conditions prevail, seeds take longer to dry down, and harvest becomes delayed.  Planting soybean varieties with relative maturity ratings that match your region and your farming operation also may help with a timely harvest.

Since these seed pathogens survive in soybean debris, rotating fields with a non-legume crop may help reduce inoculum levels in the field.  Since these pathogens also survive on seed, planting bin-run seed may help perpetuate the problem in a field by continually introducing the pathogen back into the field.  Although soybean germplasm lines have been identified with resistance to Phomopsis seed decay, no commercial soybean varieties are marketed as having resistance to this disease, and soybean breeding programs may not intentionally screen their lines for resistance to Phomopsis seed decay.

When applied at later growth stages, such as R5 (beginning seed stage), foliar fungicides have been shown to inconsistently reduce Phomopsis seed decay in research trials.  Unfortunately, even when reductions in Phomopsis seed decay have occurred with late-applied fungicides, often-times the magnitude of the reduction would not have been enough to prevent levels of disease that would still be discounted at the grain elevator.

Overall, the wet and warm harvest season that parts of the state experienced was likely so favorable for infection and disease development, that there was little that could have been done to avoid some losses due to these diseases this year.