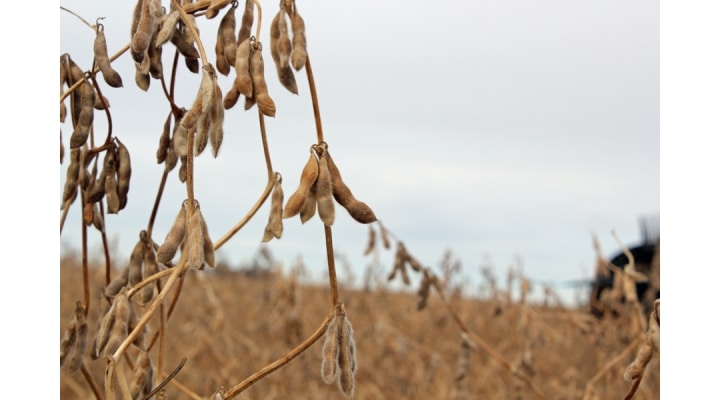 The feeding value of baled soybean residue is much lower than other fall crop residues such as corn, sorghum, or wheat. (Photo: Troy Walz, University of Nebraska-Lincoln)

The feeding value of baled soybean residue is much lower than other fall crop residues such as corn, sorghum, or wheat. Soybean residue is low in protein and energy (approximately 4% CP and 36% TDN). Additionally, soybean residue is high in lignin resulting in low digestibility and palatability. Feeding soybean residue alone will not meet the nutrient requirements of the cow and will result in loss of condition. Higher-quality feeds fed in combination with soybean residue will help stretch feed resources while ensuring the cow’s nutrient needs are being met.

Based on research, it is recommended to leave at least two tons of residue in the field to maintain soil organic matter, and even more cover residue may be needed to protect fields from wind and soil erosion. Soybean residue baling is only recommended on fields where yields were higher than 60 bushels per acre linked with only one ton of soybean forage produced for every 30 bushels of soybean seeds harvested per acre. For soybean fields with yields higher than 60 bushels per acre, lightly raking and baling a portion of the residue may be justified, especially when forages are in short supply.

The Nebraska Farm Custom Rates guide pegs statewide average baling costs at $16.20 per acre and raking costs at $8.09 per acre. Then, the $55 per ton valuing difference between input costs and market price comes down to placing a final value on nutrients removed and possible soil and water erosion.