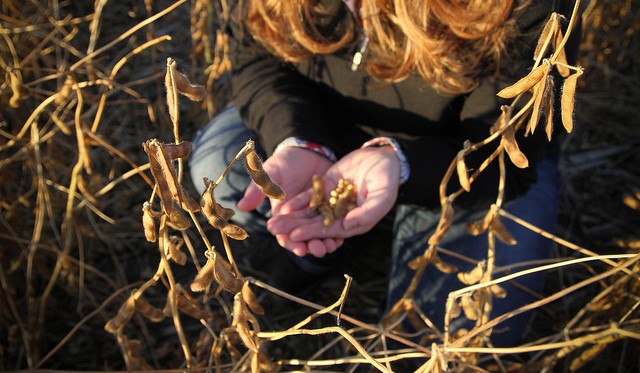 The nation’s soybean yield was up 5 percent from 2017, with planted area down 1 percent from record 2017 acreage. (United Soybean Board, Flickr/Creative Commons)

WASHINGTON — Cooler than average summer months but a warmer spring kept the 2018 corn harvest just 1 percent below last year’s record harvest. The nation’s soybean yield was up 5 percent from 2017, with planted area down 1 percent from record 2017 acreage, according to the Crop Production 2018 Summary released today by the U.S. Department of Agriculture’s National Agricultural Statistics Service (NASS).

U.S. corn growers produced 14.4 billion bushels, down 1 percent from 2017. Corn yield in the U.S. is estimated at 176.4 bushels per acre, 0.2 bushel below the 2017 record yield of 176.6 bushels per acre. Area harvested, at 81.7 million acres, is down 1 percent from 2017. The 2018 corn objective yield data indicate the highest number of ears per acre on record for the combined 10 objective yield States (Iowa, Illinois, Indiana, Kansas, Minnesota, Missouri, Nebraska, Ohio, South Dakota, and Wisconsin).

Soybean production for 2018 totaled a record 4.54 billion bushels, up 3 percent from 2017. With record high yields in Arkansas, Illinois, Indiana, Mississippi, New York, and Ohio, the average soybean yield is estimated at 51.6 bushels per acre, 2.3 bushels above 2017, but 0.3 bushel below the record yield of 2016.

Also released were the Winter Wheat and Canola Seedings and Grain Stocks reports. The Winter Wheat Seedings report is the first indicator of this year’s winter wheat acreage. Planted area for harvest in 2019 is estimated at 31.3 million acres, down 4 percent from 2018.

Sustainable mechanization of farming in Africa