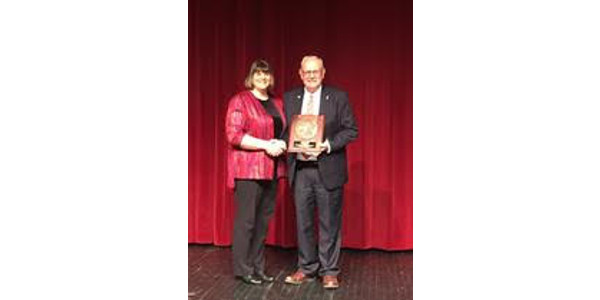 FRANKENMUTH, Mich. — David Williams of Elsie, Michigan, was recently honored with being selected as a 2017 Michigan Master Farmer by Michigan Farmer magazine and Brownfield Ag Network. The award seeks out industry leaders on farm management, innovation, conservation and leadership. David was nominated by Gail Frahm, Executive Director of the Michigan Soybean Promotion Committee (MSPC) and Michigan Soybean Association (MSA), and he accepted the award during the Great Lakes Crop Summit on Thursday, January 26.

MSPC and MSA first connected with Dave after he sought out an opportunity called See for Yourself with the United Soybean Board. He applied and was selected to travel to St. Louis, Missouri, and an international destination as well to learn more about where soybeans go, how they’re used and how the soybean checkoff is involved.

Following that opportunity, David volunteered to be a director on the MSA and was elected. He is currently in his third three-year term and has served as president since 2011. His fellow directors look up to him for his leadership, knowledge and proven commitment to being involved as an advocate for agriculture. Additionally, Dave represents Michigan’s soybean farmers on the United Soybean Board, a position he has held since 2013.

“I nominated Dave for this award, in part, because of his commitment to learning and being involved in the promotion of agriculture,” said Frahm. Dave is always willing to speak on behalf of MSA with legislators, consumers and with his peers in the agriculture industry. He also opens his farm for tours with legislators.

On the farm, he and his nephew and farm partner, Brian Washburn, are good stewards of the land and are firm believers in conservation practices. They became MAEAP verified in both farmstead and cropping systems. In addition to utilizing no-till farming, Dave incorporated cover crops to conserve nitrogen and reduce wind and water erosion. His participation in the Conservation Reserve Program has resulted in the establishment of buffers along sensitive drains to slow water runoff from the field and trap sediment to help protect water bodies.

Frahm continued, “I appreciate the high value Dave places on taking care of the farm for the next generation.” This is a family farm – not only has it been in his family for over 150 years, but he’s working with his nephew to pass the land on to the next generation. Dave and his dad, Glenn, grew the farm to 3,000 acres through the years – some land owned, some rented. And, with his nephew, Brian, their cash grain production operation is now 3,300 acres strong.

Dave says, “I’m excited that Michigan is such a diverse agricultural state. I think we’ve had a good environment for farming and I hope it continues. I’ve laid some good groundwork for future generations to benefit from the farm and continue its sustainability.”

Dave has participated in several leadership programs such as Leadership at Its Best, Soybean Leadership College, and has served as delegate for the American Soybean Association’s resolution session at Commodity Classic. Dave has also been involved with programs through the Soy Transportation Coalition and World Initiative for Soy in Human Health, sometimes requiring out-of-country travel to learn about these important organizations and their involvement worldwide.t

Tips for success with your first real Christmas tree
November 24, 2020